Home Bathroom The Beaumont Knocks It Out The Ball Park 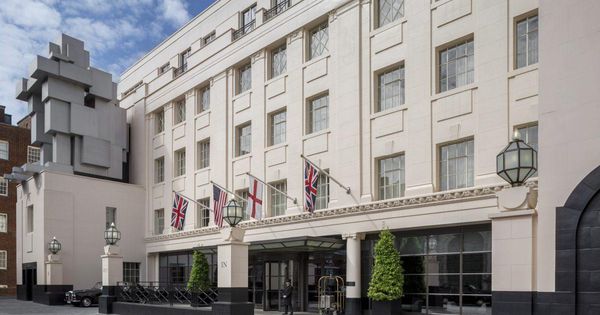 Those looking for a little slice of the USA in the heart of Mayfair, should look no further than The Beaumont. The pet project of Jeremy King – of restaurateurs Corbin & King fame – the hotel opened in 2014, in part, to reflect his love of the USA, with it even coming with its own fictional ‘back story’. Based on ‘Jimmy Beaumont’ who has left America in the Roaring Twenties to set up his eponymous hotel, the hotel’s design reflects an Art Deco elegance which plays out across the bedrooms, public areas and dining spaces.

The Beaumont’s sleek appearance hints at its slick hospitality.

While the property has since been sold to the Barclay Brothers, who own The Ritz, it still retains its original charm, which, over the past few years, has won it legions of fans and accolades. For those who love the age-old, classic feel of The Wolseley, The Delaunay and Brasserie Zedel (not to mention their eclectic menus full of crowd-pleasers), which Corbin & King are renowned for, then you are in for a treat.

From its clubby Colony Grill Room restaurant, featuring transatlantic favourites, such as New York Shrimp Cocktail, Caesar Salad and a fun-filled DIY ice-cream sundae, to its elegant Magritte Bar, specialising in bourbons and American whiskies – the feel is one of pure decadence, straight ‘outta New York. The latter is inspired by the great tradition of American bars that became legendary in London and Paris during the 1920s. It’s the sort of place you’d half expect to see Ernest Hemingway or F Scott Fitzgerald leaning up against the walnut-panelling.

Service throughout the hotel is top-notch, with guests greeted by name, so on arrival you feel like Zelda Fitzgerald returning home to be greeted by her butler. Interiors, by Richmond International, meanwhile, are dripping with glamour and attention to detail.

This month, the hotel is in full-on celebratory mode to celebrate the two scheduled Major League Baseball season games, which will be hosted in Europe for the first time in history. For one weekend only (29-30 June), the Boston Red Sox and the New York Yankees will bring their historic rivalry across the Atlantic to the London Stadium. A far cry from Boston’s Fenway Park or New York’s Yankee Stadium, the London Stadium will be dramatically transformed into a 60,000-seater ballpark and play host to two games, as both teams seek to settle old scores on London soil.

Soak up the American ambiance in the Colony Grill.

The Beaumont’s Colony Grill Room – the sort of place that feels like it is London’s best-kept secret – will be hanging out the bunting and is at the heart of the hotel’s proceedings with a menu of authentic Boston dishes on offer from 24-30 June. Developed in collaboration with New England-based travel and food writer, Larry Olmsted with The Beaumont’s executive head chef Christian Turner, guests can expect a selection of iconic dishes most closely associated with Boston – think: New England Clam Chowder, Lobster Roll, Fried Clams and Boston Cream Pie.

The lobby welcomes with its Art Deco feel.

While, the foodie event will no doubt bring in ex-pats, sports fans and USA aficionados alike, The Colony Grill is – on an ordinary day – a pretty special place to be. While Corbin & King have moved on, it nonetheless still echoes the duo’s golden touch when it comes to getting the dining ‘mood’ just right. An intimate space, you sit in red leather booths and soak up the timeless vibe, with its subdued lighting, black-and-white photographs of screen sirens and polished service. The menu, meanwhile, offers a range of transatlantic favourites. From Crab Cakes with Creole Mustard to Avocado Vinaigrette, you’ll have trouble as to what starter to choose (as you’ll want them all). Mains include a range of steaks – Tomahawk to Flat Iron – then there’s Grilled Lobster, Sole Meuniere and classic Dishes of the Day, such as Chicken Pot Pie or Salt-baked Sea Bass. Desserts, such as Red velvet Cake, Knickerbocker Glory and Rum Baba, will bring a smile to your face.

Elevating the experience further is a pre- or post-supper cocktail in the recently refurbished The Magritte Bar, which is a buzzy, sumptuous space with its jewel tones and eclectic collection of early 20th century paintings and rare ‘Charlot’ Charlie Chaplin posters. Cocktails focus on the classics – such as Mint Juleps and Jimmy’s Collins – and are best sipped perched at the back-lit, glimmering bar.

Soak it up: it’s the Roaring Twenties in the tub.

Tucked away on the almost-residential-in-feel Brown Hart Gardens, The Beaumont feels secluded and serene, despite it being in the centre of London. But it is, in fact, just a brief stroll away from Selfridges on Oxford Street, Bond Street and Green Park. This in itself feels instantly luxurious, but you’ll be further seduced by the bedrooms. Boasting Art Deco detailing, such as monochrome mosaic floors, sea-green tiling and marble basins in the bathrooms, it’s like you’ve stepped into a private home.

Little details give an immersive feel.

The attention to design detail is impressive – with wooden bedheads, bespoke cabinetry, and even the bedside clock, retaining a period feel. There are Dr Harris toiletries, fine wallpapers and cartoon prints by Sem on the wall. Minibars (non-alcoholic) are complimentary, and there are little treats, such as homemade chocolates and fruit to welcome you. There’s also a complimentary chauffeur-driven emission-free car to drop guests short hops away. Jimmy Beaumont would approve.

Rates start from £425  for a Classic Room, thebeaumont.com