Home Bathroom This home decor should never make a comeback 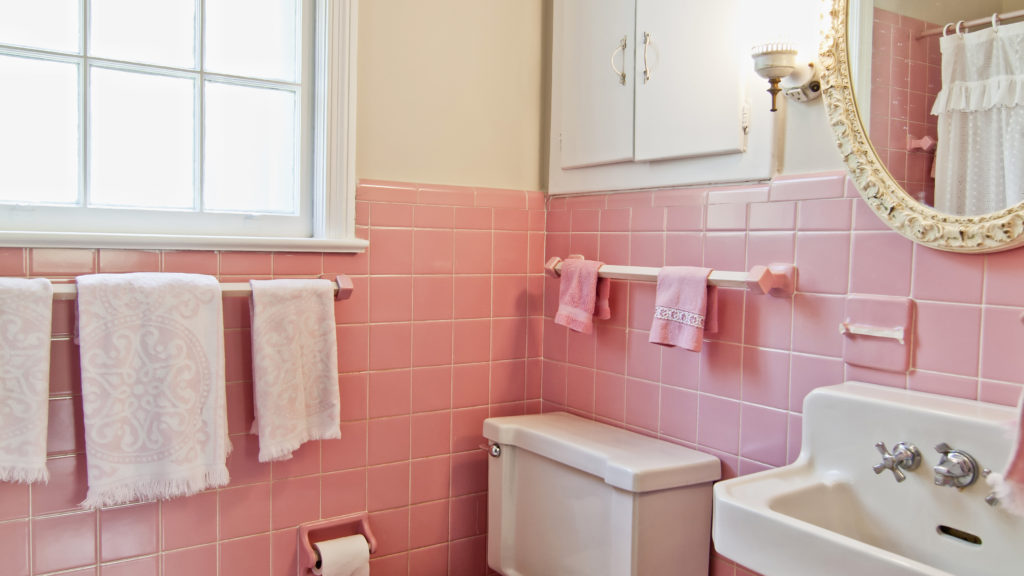 Linoleum floors the color of spoiled oatmeal. Avocado green appliances. Carpeted bathrooms. Popcorn ceilings that gradually disintegrate and drift to the floor like dandruff. At one point, these dubious design decisions were in vogue.

Now, of course, such cosmetic catastrophes might give buyers pause. As a house-hunter in suburban Boston five years ago — the apex of the real estate boom — I saw this firsthand while touring prospective abodes. Bathrooms the color of Mamie Eisenhower’s boudoir? Wallpaper that could induce vertigo? Jacuzzis modeled after the set of “Dynasty’’? If I wanted to live close to the city in a house larger than a mousetrap, well, I’d have to swallow my pride and accept a bathtub that looked like a rotting canoe. Sellers didn’t have to impress anyone.

But the (gaudy, Formica) tables might be turning, said Dave Twombly, a Cambridge-based agent with 4 Buyers Real Estate. Even as inventory remains at an all-time low, according to data from the Massachusetts Association of Realtors, house-hunters are getting choosier.

“We’re seeing more [homes] sit on the market, even in places like Cambridge,’’ Twombly said. “There seems to be less intensity, and I think buyer fatigue is a real thing, too. Buyers are less willing to do anything just to get a place, as they had been in years past.’’

With that in mind, I asked some of Boston’s top interior designers to reflect upon the biggest style disasters through the decades. I started with the 1950s, because this is the era when post-World War II suburbanites began decorating in earnest, influenced by television and buoyed by Eisenhower-era assimilation and consumerism.

“After the war, people got into homeownership, got creative, moved to the suburbs. People were feeling confident about design and decor, seeing ads. It was a different experience than in previous generations, and you’re doing what you see,’’ said Kathie Chrisicos, president of Chrisicos Interiors.

Are you guilty of these sins? Consider removing them before putting your home on the market.

“Ceramic glazed tile. Pink and gray went hand in hand. Were they color-blind? And in many homes, the tile has lasted!’’ – Chrisicos

“Wall-to-wall shag carpeting. People would get vans and even carpet the interior with it. It was pretty disgusting.’’ – Chrisicos

“Macramé wall hangings. They’re back, and everyone is using them. I hate them! It’s so kitschy. There’s nothing elegant or classic about the design. It’s nails on a chalkboard.’’ – Gates

“Growing up, my aunt and uncle had a porch with a fake grass carpet. So many wrongs! Walking on it with bare feet hurt, felt ‘plastic-y’ and weird. Plus, how do you clean that? I’ve seen commercial interiors in the last few years with fake grass walls and images on Pinterest of rooms with fake grass rugs, and it brings me back — and not in a good way. I have a hard time with fake plants, too. They’re dust catchers.’’ – Tevolitz

“Overstuffed upholstered couches with matching love seats — soft and mushy, with rounded arms. My parents had a teal leather one. It was like a puffy sleeve, if a puffy sleeve were a piece of furniture.’’ – Gates

“Wall-to-wall carpeted bathrooms were a thing I remember seeing when I visited friends’ houses when I was a child. I’m not sure why this ever was a cutting-edge trend in the 1970s and 1980s … It’s a breeding ground for mold, mildew, and weird smells. Even the Centers for Disease Control recommends against its use.’’ – Tevolitz

“Pickled wood, almost bleached, with a whiteish-pink look to it. I’ve gone into homes where the woodwork is like that, and you can’t work with it. You have to start from scratch.’’ – Chrisicos

“Overly ornate window treatments: scalloped, layered, in florals and pastels. They’re big dust collectors. I think it was a reaction to what came before in the 1970s: earth tones, harvest gold, olives, autumnal colors. This is everything the 1970s wasn’t.’’ – Grant

“Waterbeds are so 1970s and 1980s. I’m guessing the popularity was due to the sexual revolution, though I was a child, so I can only speculate. I hear you can still buy a new waterbed, but why? A friend in elementary school had one, and the frame was covered in padded brown pleather. Plus the mattress was vinyl, and not in the coolest sense of the word. Ew!’’ – Tevolitz

“Office-styling your home with track lighting, fluorescent lighting, drop ceilings, vertical blinds. This was the early 1980s, when power suits were in for women.’’ – Grant

“Wallpaper borders. In the decade prior, wallpaper was so popular. This seemed like a way to clean up the wall by painting it but still carrying the trend forward in a smaller way.’’ – Grant

“With the Internet, the DIY trend of the distressed look: taking a perfectly fine piece of furniture and making it look old.’’ – Grant

“Theme decorating, such as nautical, with anchors, shells, and boats — overly obvious decor where you need to instruct people as to what it is you’re going for, rather than using colors.’’ – Grant

“Word art: It’s so redundant. So many people have it! It needs to stop. It’s pretty tacky. Kids rooms get a free pass — but not when it’s in the middle of your kitchen or living room.’’ – Grant

“Accent walls. I’m not a fan of painting a wall a different color. People take it a step too far, and it turns into a kaleidoscope of color. Don’t try a different color in every room. One room needs to tie back to the next.’’ – Tevolitz

“I hate terrazzo floors. They’ve made a comeback, and it makes me want to cry. Probably popular because they’re very durable, but [they] will always remind me of 1970s commercial office spaces or schools.’’ – Gates

“Granite countertops. I prefer a calmer, more sophisticated look. There are homes where granite works well; unfortunately, as in most trends, overuse creates a negative impression.’’ – Chrisicos

“A flush-mount boob light. Every contractor still puts them in. It’s frosted glass with a finial at the bottom that looks like a nipple. They’re cheap.’’ – Gates