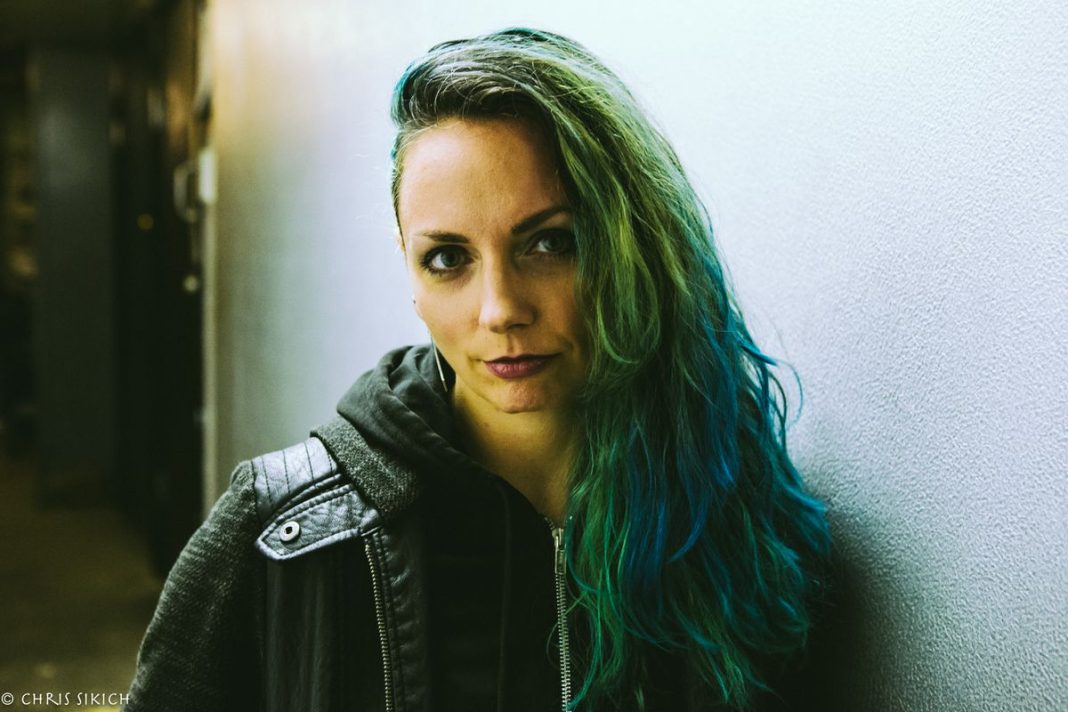 Most nightlife venues have fire codes, first-aid kits and security guards checking guests’ bags for contraband items, but few business owners acknowledge another safety risk in their midst: the sexual harassment of their customers by other patrons around them.

Baltimore punk singer and educator Shawna Potter is driving to change this with her new book Making Spaces Safer: A Guide to Giving Harassment the Boot Wherever You Work, Play, and Gather, out May 14. The author shares practical tips for deterring harassers in virtually any place where people congregate, from bars, music festivals and house parties, to coffee shops and libraries.

Since 2011, Potter has taught workshops on bystander intervention, and since 2013 has trained staff at nightlife venues and other community spaces on the many ways to help when these kinds of abuses play out in public. She’s had first-hand experience with the compounding stress of being regularly harassed: Men have groped her in the street, yelled obscenities from cars and cruised behind her in a pickup truck as she cycled.

With her new book, Potter wants to make clear to harassers that they are outnumbered by the public. The author urges bystanders to step up and businesses to take a stand with simple acts, including developing anti-harassment policies and posting them conspicuously on company websites, social media, event pages, flyers, entryways and bathrooms; setting up e-mail addresses where customers can file complaints; and keeping phone numbers for taxis, help hotlines and shelters behind the counter.

Most crucial, Potter argues, is training employees so they know what to do in the moment: how to intervene without escalating situations; how to interrupt with small talk or distract perpetrators in order to speak with victims; how to watch harassers’ behaviour, delegate their ejection and document incidents.

Bystander intervention serves as a welcome mat for patrons and sends a message to perpetrators: You can’t do this here. Potter spoke with The Globe and Mail about standing up amid these “easy-to-ignore moments” of sexual harassment in shared public space.

A Cornell study found that people being sexually harassed in public feel significantly worse when bystanders don’t intervene. Why are people hesitant to help in these situations?

There’s a phenomenon called bystander apathy. If no one in a group is helping, everyone considers that to be the norm. It takes one person stepping up to break that spell everyone is under, to get them to start to want to intervene. People are always assessing their own safety.

Women don’t need a white knight in shining armour to come rescue them; we can speak for ourselves. But I’m also a human being and I could use someone having my back. There’s a way for men to do that. No one has to swoop in, but you can interrupt the harassment and just give me a chance to get out of there.

Why is it important for patrons at bars, music venues, cafés and other public spaces to know they’re going to be safe from sexual harassment?

If your patrons aren’t aware that you know what to do when harassment happens, they won’t tell you when it happens to them. It means they are either enduring it so they can try to see the band they came to see and hang out with their friends, or they are leaving. Those options are not okay. Venues need to make it obvious that they care that their patrons experience harassment, that they will do their best to prevent it – and deal with it when it does happen.

How do you incentivize anti-harassment policies and staff training for business owners who may not care about these issues?

You might not get it, but your patrons do. They’re going to take their money elsewhere if they feel your venue is unsafe. Who do you want in your space? People who feel entitled to degrade others? Or do you want the rest of us who just want to have a good time?

Bigger bands also have the power to speak directly with venue staff and ensure that until they have a sexual-harassment policy and their staff members are trained, they won’t play there. That’s a lot of money potentially lost.

You write that tech can play a role. One band set up a texting hotline via Google Voice so audience members could report harassment at their shows. Some bar staffers host private Facebook groups to exchange intel on problematic customers. We’ve also seen tone-deaf bar owners get publicly shamed on social media when they fail to respond to these issues. Is online shaming the right avenue here?

Everyone deserves a chance to do better. People should make a good-faith effort: have conversations with staff, e-mail them and point them toward the tools they need to make their space more inclusive. If business owners just refuse and they’re not interested, that’s the time to start letting other people know, “I don’t think you want to spend your money here.” If a loss of revenue influences owners, that’s better than nothing. Still, change needs to be more than just saving face; staff need training and they need to prove they’re going to stick with it.

What’s your response to people who will read this and say you’re taking the fun out of nightlife – that you’re a killjoy?

I always think, whose fun are we ruining? Is it fun being grabbed by your private parts by a stranger? Why do we prioritize the people who make other people uncomfortable?

Bars, cafés, libraries: These are places where people enjoy their leisure time. You argue that when we fail to help women enjoy these spaces free of harassment, we’ve decided that some people deserve leisure time and some people don’t.

It pulls you out of your head and out of your day. To be brought out of your own thoughts, your own purpose and your own autonomy, this is a selfish act. I want to experience the same freedom of movement and access to leisure time as you. I want to be myself and relax when I go out.

After France introduced anti-sexual-harassment legislation last year, French police handed down about 450 fines for street harassment; officials see their efforts as a “culture battle.” Should government play a role in shifting social norms around these types of abuses in public?

I’m skeptical of government intervention. Real, lasting change comes from talking with community members and getting bystanders to see how much power they have to make a huge difference in others’ lives by sticking up for them and saying something. Straight up DIY: It goes a long way.

This interview has been edited and condensed.

Live your best. We have a daily Life & Arts newsletter, providing you with our latest stories on health, travel, food and culture. Sign up today.