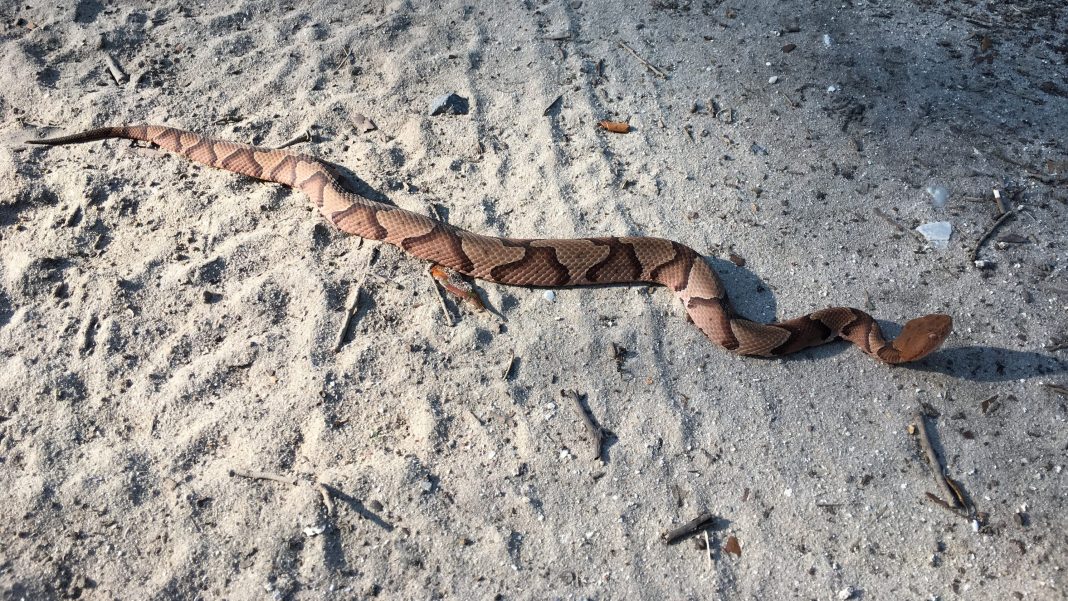 As late summer turns to fall, hikers, gardeners and other outdoor enthusiasts in the Upstate should be aware that it’s also baby copperhead season.

“August and September is the time we see small ones,” said Andrew Grosse, state herpetologist with the Department of Natural Resources.

“If you do come across them, enjoy them,” he said, “but give them a wide berth.”

There are 38 species of snake in South Carolina, six are venomous and three are found in the Upstate — the pygmy rattlesnake, the timber rattlesnake and the copperhead, which is the predominant venomous snake in this region, Grosse said.

A copperhead snake at the Greenville zoo. (Photo: MATT BURKHARTT/Staff)

Copperheads are able to reproduce at about 2 to 3 years old and generally breed in the spring, finding a mate using a scent trail through the forest, he said.

And this time of year, they give birth to live young, typically six to seven babies, although it can be as many as 15, he said.

“The little guys are ready to go, fully able to hunt and do the same things as adults,” Grosse said.

More: Watch your step: Facts about snakes in Upstate SC

But one difference with the juveniles is that the tip of their tail is bright yellow, which they use as a lure to attract rodents and other small animals that are a food source, he said.

“Copperheads are ambush predators and they sit and wait for something to come by,” he said. “Then they wiggle it to attract small prey, which thinks it’s a food item, like a worm.”

Copperheads can grow to 3½ feet and have a strike distance of about a third of their body length, Grosse said.

But it’s a myth that the bite of a baby copperhead is worse than that of an adult because they inject all their venom, he said. Venom has the same potency regardless of size and researchers are finding more evidence that snakes of all ages are able to meter their venom, he said.

Our journalists relentlessly work to stay in touch with the pulse of Upstate SC. Stories like this help address, explain and clarify your questions and concerns. Please consider becoming a subscriber. Here’s our special offer.

Besides, using up all their venom at once isn’t a good survival strategy, he said, because they may need it to obtain food or to protect themselves.

In fact, the adult bite could be worse because the fang size is larger and might penetrate more muscle, he said.

A copperhead snake at the Greenville zoo. (Photo: MATT BURKHARTT/Staff)

During the summer, the serpents are more active at night so people are more likely to see them — whether around their homes or in the wild —— at dusk and dawn, he said.

But as the weather cools, they are more likely to be out during the day to warm up.

“If you do find them, leave them alone and they will leave on their own. That’s the best thing to do for everyone,” Grosse said. “The majority of snake bites happen when people are trying to pick them up or kill them.”

Homeowners, especially those in neighborhoods bordering woodlands, should be on the watch for snakes around their homes, particularly around flower pots and in gardens, he said.

“Look before you reach down into places that might be heavily vegetated,” he said. “They don’t want to be around people any more than people want them to be around. They are not aggressive, but they will defend themselves.”