Home Garden Care for your plants in the winter months 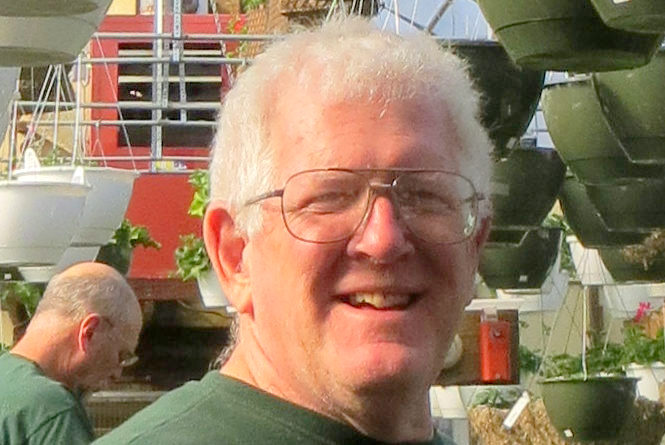 ROCKPORT – Dennis Milliken has been in love with plants all his life. He recalled that even as a young boy living with his parents his room was always filled with plants. Milliken works at Green Thumb,  in West Rockport, a full service floral shop, with greenhouses and a nursery. He has been there 10 years. He worked at Merry Gardens, Bob’s Flowers and spent 20 years at Hoboken Gardens.

Milliken knows house plants and how to keep them thriving in the winter months. He recently spoke at the Camden Public Library, at an event hosted by the Camden Garden Club.

“I’m semi-retired,” he said. “I only work at Green Thumb one full day and three half days. If you want to catch me there, you have to come early in the morning.”

People stop in all the time asking questions about plants.

“Diagnosis and also to determine what a plant is sometimes,” he said. “I went to college and when I got home, instead of teaching, I decided to work with plants and have been doing it for 50 years, so yes I need to know a lot about plants.”

People tend to move their plants from outside in the summer to inside in the winter.

“It’s good to put them outside in the summer,” he said. “They need the fresh air and there are beneficial insects that can take care of the bad bugs that are on a plant. We have a great climate in the summer here for growing plants outside.”

Light can be a tricky when you move the plants back inside.

“Most plants need light, of course, to perform photosynthesis,” Milliken said. “If they don’t get the right kind of light they’re not going to live very long. People want a plant in the house sometimes, in a place that doesn’t have very good light. I would suggest you buy two and keep one in a sunny window and one in that place that doesn’t get very good light and just rotate them once a week.”

He continued: “You want that southern or western sun in the winter. It also depends on where your house is situated, too. Are you in the woods or out in a field? And it depends on your plants. You need to know if it needs a lot of sun or not.”

Milliken said plants slow down in the winter.

“They slow down and some go dormant,” he said. “They will let you know when they are coming back to life with a bud or something popping up. Dormancy is a good thing because some plants will shed their leaves and you don’t have to worry about bugs so much, except for soil.”

“I had a client bring in a jade plant and it was limp,” he said. “He thought he had under-watered it because it was limp, when, in fact, just the opposite was true. He had over watered it. It looks the same as if it hasn’t been watered, but the roots have gone so its not taking up any water and it’s going to die.”

You should saturate the soil and then let the plant go dry before watering again.

“It’s safer that way,” Milliken said. “There are some things that like it evenly moist, but for winter it’s a good rule. Summer is not a problem. Once we get into April, plants are growing actively so they are going to use more moisture. If you’re not sure and you’ve watered a plant, but think it needs more water, wait a day or two because you’re better off if it’s a little on the dry side, then if it’s too wet.”

Heat inside in the winter is a factor.

“Usually 60 degrees F is a good place to be and shouldn’t be a problem,” Milliken said. “The plants are semi dormant if it gets on the chilly side, but some plants won’t like it at all. They’ll shed leaves and you’ll need to warm them up a little bit. Of course, a sunny window will warm them right up. Sixty to 80 F. is a good place to be on the temperature. If the temperature gets down to 50 that’s a little chilly for a lot of plants.”

A plant’s gotta eat. It needs nutrition like any other living thing.

“Again, it depends on the plant, but for houseplants feed them once a month. In the summer you can do it quarter strength every time you water. Some people don’t fertilize their houseplants at all, but they need to eat. Any general purpose fertilizer is fine. It doesn’t matter the brand.”

We’ve all seen giant plants in little, tiny pots and small plants in what seems like big pots. How do you determine the size of your pot?

“When the plant tips over is a pretty good indication the pot is too small,” Milliken joked. “Its plant size verses root ball. It varies of course, but generally you want about an inch between the roots and the wall of the pot.”

Milliken said repotting a plant depends on the root ball.

“Some plants spend their entire life in one or two pots,” he said. “My bonsai has been in the same pot for 20 of the 40 years I’ve owned it. It depends on what kind of volume the root ball is going to take up.”

Plastic, clay and ceramic pots. Which one is best?

“Plastic will retain more water then clay will,” Milliken said. “The clay pot is nice and heavy so it won’t tip over as easy. Clay breathes a little bit better and that’s good for the plant. There’s a weight factor, too. Plastic is lighter and easier to move around. Over-potting can be a problem, to much pot for the root ball and the soil stays too moist.”

Milliken said you can root prune as well and use the same pot.

“Airplane plants or spider plants, as they are called, you can prune the roots off those quite a bit,” he said. “You can take almost half the root ball sometimes and put it right back in the same pot. It won’t last very long because the roots grow like crazy, but it’s easy to do.”

Milliken said not to wash the dirt out of the roots unless you have a root rot problem.

“If the roots are dead you want to look for the right ones to cut out, but generally you don’t have to wash the dirt out,” he said. “People generally say you should crunch up the root ball a little bit before repotting. It helps it spread out. I will take a knife and just slice right down the root ball and quarter it. That will make the roots expand.”

Mildew is a common plant malady. Milliken gives us a simple home remedy.

“Take a gallon of water and add a tablespoon of baking soda,” he said. “Add a Tablespoon on canola or vegetable oil and spray it on. Apply it three or four times about a week apart. That should take care of the problem.”

In general for houseplant care your checklist should include, light, temperature and soil, water, fertilizer and container requirements.