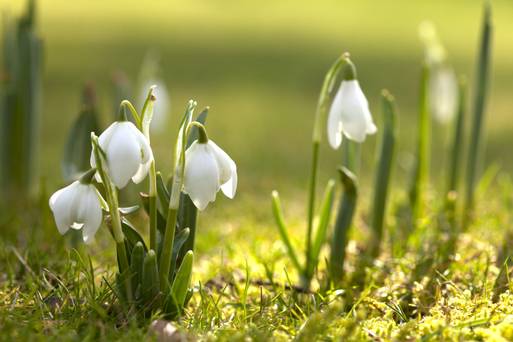 There can be a danger to the warm winter temperatures: new growth, soft by nature, can emerge too soon in the year, and sudden cold snaps will burn and blacken the green shoots, stunting growth.

However, we do have some plants that embrace whatever the weather throws at us and that seem to thrive as happily in sun or snow. The early year colour from bulbs creates hope that spring can’t be too far away and a new gardening year has begun. It was delightful when I spotted an arc of yellow crocus (below) and some snowdrops peeping through a lawn this week.

Snowdrops (Galanthus nivalis) are one of the earliest plant bulbs to grace us with their presence during the winter time. It’s amazing that these wonderfully delicate flowers will last longer in much colder temperatures, some right up until March. The evolution of sharp, hardened leaf tips ensures that the plant can effectively break through frozen ground in late winter. The sight of the silvery-green strap leaves pushing their way out of the grass is something that I never tire of – and they look even more romantic peeking out of a snowy scene.

The snowdrop is often thought of as being native to the these islands, but it is now accepted to be a species that was introduced from areas of Europe as well as parts of Asia and Russia. It has since naturalised throughout Ireland and the UK, having been recorded in cultivation during the 16th century and eventually being spotted growing in the wild in the late 18th century. Since this time, the snowdrop has established itself throughout our woodlands, gardens, parks, grasslands and churchyards. Having survived for over two centuries in such numbers makes it a truly naturalised species on our lands.

So, how best to grow snowdrops in our gardens?

Snowdrops thrive in light shade under deciduous trees or shrubs, making beautiful companions for cyclamen and hellebores. They can also be grown in containers if re-potted annually.

As with most bulbs, snowdrops require well-drained soil, but this shouldn’t be allowed to dry out in summer. The ideal soil conditions replicate their natural woodland habitat: humus-rich and slightly moisture-retentive. When preparing your site for planting, add plenty of organic matter.

Snowdrops don’t establish themselves successfully when planted as dry bulbs. Specialist nurseries tend to supply them with the plants still in full leaf (called ‘in the green’), with the bulb wrapped to preserve moisture. When buying bulbs, check with the supplier how long the plants have been out of the ground, and ensure the bulbs aren’t soft or wilting. When planting single bulbs, add some sharp sand for drainage, and label the plant – especially if it’s an unusual variety. This will also remind you where your snowdrops are once they’re dormant!

Once established, your snowdrop colony should go forth and multiply of its own accord. It’s best to divide clumps every three years, particularly when growing cultivars, to avoid overcrowding. Clumps of snowdrops repeated around the garden in winter also make a lovely feature.

To transplant snowdrops to other parts of your garden, lift plants that are ‘in the green’ after flowering, when the soil is moist. Carefully tease the clumps of bulbs apart by hand, trying to avoid damage to the roots.

It’s best to replant the bulbs singly, spacing each one at least two bulb widths apart. However, where large clumps include small seedlings, replant the bulbs in small clusters, spreading the roots out well, and water in.

If growing snowdrops in containers, re-pot in July or August when the plants are dormant, using fresh compost.

When planting snowdrops, don’t use strong fertilisers or manure-based compost; leaf-mould is preferable and more similar to their natural, woodland environment.