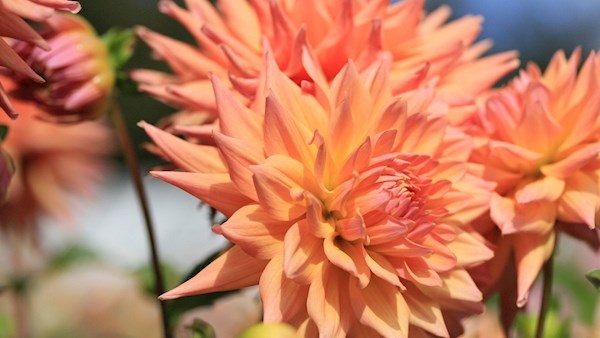 They’re the star turn of late summer, but if your blooms are looking lacklustre, Hannah Stephenson has advice on how to perk them up

Diva dahlia shows take place throughout late summer, these spectacular plants continue to dazzle, their gorgeous blooms creating a riot of colour. But what if your own specimens are looking forlorn, with damaged leaves and petals or stilted growth? We spoke to the experts to find out how to tackle these problems. The Cornish Dahlia Society, which last weekend staged its 39th annual show at the Lost Gardens of Heligan, and Katie Kingett, productive garden supervisor at Heligan, offered us the tips below.

Check if your dahlias have a disease. Fungal diseases (powdery mildew and dahlia smut) are the most difficult of dahlia ailments to remedy. Spider mite is also difficult to deter, but could be treated every 10 days using a horticultural soft soap.

It’s recommended to remove the lower leaves affected by mildew to improve air circulation. You could also try a milk/water 30/70 solution, which is commonly used to manage powdery mildew on cucumbers and courgettes.

Tubers will not be affected so can be lifted as normal and cleaned thoroughly but the spores can contaminate soil for years afterwards so plant your dahlias in a new location the following year.

Deformed blooms are likely due to capsid bugs. As they suck the sap of plant tips, usually developing flower buds, toxic saliva enters the plant, causing distorted buds and flowers. Capsid bugs are green, so they are difficult to see — it’s best to look out for early signs of damage, such as holes in leaves and distorted foliage. Simply remove foliage affected. Leaves may develop many holes, which get bigger as the plant grows.

You could try an organic spray but try to do so at dusk, when pollinating insects are less likely to be affected. Weed control is another way to help prevent the spread of capsid bugs, which may use weeds as host plants over winter. Vaseline on stems could be worth a try. Aphids such as blackfly can cause issues on the tips of plants. Spray off using water or you could use a horticultural soft soap. Alternatively, cut out the infected stem and monitor closely.

Do you have holes in petals? This is likely to be due to earwigs. The best solution is to put an upturned pot, filled with straw, on top of a cane secured in the ground. Check the pots regularly and empty earwigs elsewhere. Put the pot at a similar height to the dahlia flowers you want to protect.

Ground preparation is key. Add manure early on in the autumn in an area where you are intending on planting your dahlias. Alternatively, add mature matter from your compost heap or blood, fish and bones at planting time. Poor preparation may result in a reduced show of flowers and a less vigorous plant.

Slugs love dahlias, so be vigilant against slugs while the plants are establishing. Put your slug traps out before you plant, so you clear the area before you begin. Transplanting bigger plants from containers which were started off indoors may also help reduce slug damage.

Plant after the risk of frost has passed. If you plant them out too soon, they could get knocked back by frost. Or pot up tubers in containers in early April indoors ready to transplant later, which would give you an earlier flowering period. Don’t plant them out until at least the end of May.

Water at the base of the plant will help alleviate the risk of mildew. Hot, humid and damp weather can lead to powdery mildew destroying foliage. Remove foliage affected to prevent it spreading to the healthy part of the plant. Regular feeding on a weekly basis is a good idea.

If you want the flowers to last until the end of autumn, you’ll need to deadhead them regularly. As the plant develops, pinch out the dominant bud, which will encourage sideshoots to produce a much bushier plant with more flowers.

Lift the plants after a hard frost. Leave the tubers in the ground until the foliage has been hit by frost and the leaves are blackened. Cut the stems to ground level then dig out the tubers carefully. Once the tubers are out, hang them upside down in a dark, dry, frost-free place with the stems pointing downwards because that allows any water collected in the stems to drain away so it won’t rot the tubers. Leave them upside down for two to three weeks before storing them in crates for the winter.

Check spasmodically and remove any tubers which look like they are rotting. They can then be started off again in late spring.