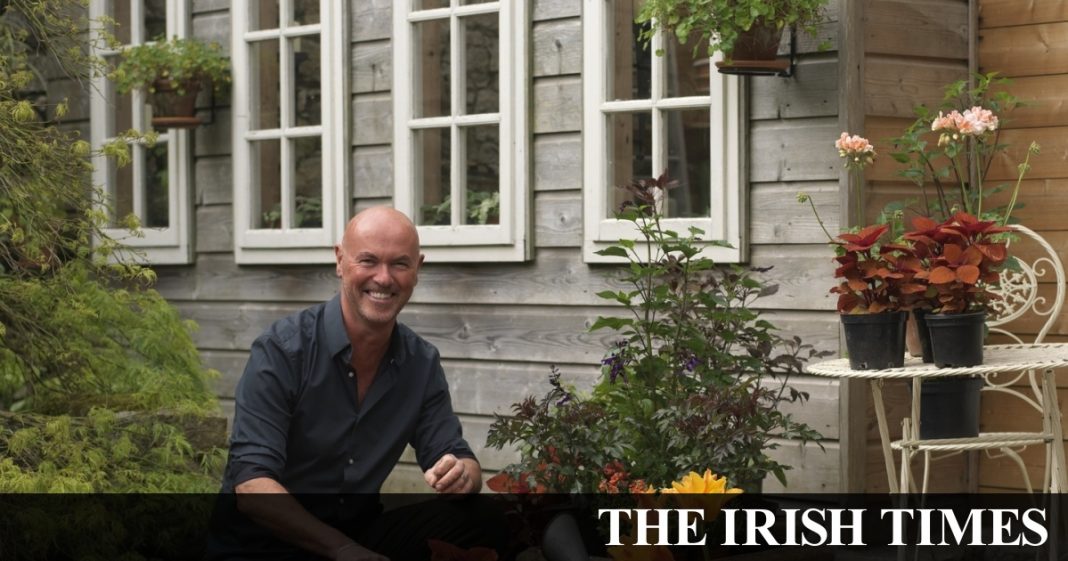 What’s the secret to creating a brilliantly colourful, pollinator-friendly display of summer pots that will still look as good in late September as it does in June? Someone who knows the answer to that question is the Wicklow gardener TJ Maher whose small country garden, Patthana in Kiltegan, created with his partner Simon Kirby, is known for its brilliantly bold and beautiful summer container displays. A successful artist (his first solo-exhibition was recently held at Dublin’s Taylor Galleries), Maher’s expert understanding of colour, texture and form shines out brightly in his summer pots, which are arranged in large theatrical groupings using containers in a variety of heights and sizes for maximum effect. So, too, does his great love of gardening and his skill in creating the optimum growing conditions to produce such healthy, happy plants.

His first tip is to carefully consider the containers themselves, as their shape, size and design are all elements that will have a visual and horticultural impact on the final display. “I always choose wide-based pots – at least 25cm at the base- because they give plenty of room for the plants’ root systems, plus they’re much less likely to blow over in a summer gale.” He also advises using pots of a similar colour and shape within any particular display. ‘I wouldn’t, for example, ever put a square container next to a circular one because it somehow always looks jarring.” His own preference is for terracotta “because it’s a natural material that ages so nicely and acts as a gentle counterfoil to the plants themselves.”

Don’t mix plants in a pot

Next, he says, treat your summer containers like props that can be easily moved on and off stage as required. So rather than following the traditional route of planting a container up with a mix of different plants, he uses just one single kind/ variety but planted in generous enough numbers to fill it. Also, rather than planting directly into each container, he plants into ordinary black plastic pots which he then plunges inside the terracotta containers. Why? “By using just one variety, you can create generous pops of intense colour that can be easily rearranged as different elements within a massed display of containers whenever you feel like it; in other words, you’re not stuck with the same static display for the entire summer.

“By using the black plastic pots sunk into terracotta pots, it’s also very easy for me to temporarily remove a particular variety of plant from a container if it’s beginning to fade or if it needs to be cut back to encourage a second flush. I can then quickly replace it with another species/variety that’s looking really good. It means that I can easily edit a massed display whenever I feel like adding a new twist to it. Similarly, plants growing in black plastic pots are a brilliant way to add a burst of temporary seasonal colour to a border; they’re portable while the pots themselves ‘disappear’ amongst the foliage.”

His preferred growing medium is two parts multipurpose compost to one part garden soil (a suitable alternative would be the loam-based John Innes No 2 compost, available from good garden centres), to which he mixes in a handful of pelleted fertiliser. From July onwards, he also gives his summer containers a generous weekly liquid tomato feed to keep them healthy and floriferous.

Use discreet stakes for taller plants

Discreet staking is another must-do for taller species such as cosmos, dahlias and salvias. “There’s nothing worse than losing beautiful plants in their prime because of one windy day” – while regular deadheading is also essential.

Last but most certainly not least, Maher emphasises the importance of choosing floriferous, long-flowering vigorous varieties alongside some chosen particularly for their handsome foliage. His own preference is for deeply saturated jewel-like colours, especially hot pinks, rich oranges and peacock blues. Favourites include some tall, dusty orange species-type dahlias grown from seed, as well as named varieties such as the compact, chocolate-coloured Dahlia ‘Dark Desire’; tall varieties of tagetes (many grown from seed that he and Simon collected while on holiday in Morocco); the ‘Wish’ series of salvias and Salvia ‘Amistad’; fruity coloured varieties of nemesia such as ‘Mirabelle’ and ‘Peach’; diascias (‘Diamond Orange’ and ‘Diamond Fuchsia’); the shocking-pink Cosmos ‘Dazzler’; the deep-orange Rudbeckia ‘Cherokee Sunset’; the Asiatic lily variety known as ‘Night Flyer’ (burgundy-red); and coleus in vibrant shades of crimson and orange including ‘Campfire’ and ‘Redhead’, all of which do best in a sheltered spot in full sun.

While acknowledging that the use of colour is a very personal choice for any gardener, he believes that the most successful summer container displays use colours of a similar intensity. “For that reason, I’m careful about how I use yellow while I’m also very wary of using white because it ‘shouts out’ so very loudly in any display. But it’s great for adding interest to a shady spot in the garden, in which case I like to pair it with silver foliage plants such as Plectranthus argentatus, the blue-and-white flowered Fuchsia ‘Delta Sarah’ and the violet-blue Geranium ‘Rozanne’ [also known as ‘Gerwat’, this brilliant perennial flowers all summer long].

Some of Maher’s summer containers were planted up last month and then grown under cover in his very lovely glasshouse to give them an extra early start (a sunny porch, conservatory or polytunnel would also be suitable). But the vast majority are planted up at this time of year (mid to late May) using some plants raised by him from seed and other bought in Johnstown Garden Centre (near Naas), which he recommends for its outstanding selection.

Tomorrow (Sunday 12th, 12pm-5pm) and the following Sunday (May 19th), Maher will also be opening his and Kirby’s garden to the public and giving a talk (2pm) in which he’ll be sharing his knowledge of how to create the most magical summer container displays. He’ll even have some of his very favourite plants for sale, making it even easier for visitors to recreate those sumptuous summer container displays in their own gardens this summer.

Young plants and seedling raised under cover need to be ‘hardened off’ by gradually acclimatising them to harsher outdoor conditions before planting them outside. It’s also important to bear in mind that just one hard late frost at this time of year can devastate young seedlings, transplants and bedding plants as well as damage the tender young foliage and flowers of established plants. So make sure to have some clean, dry horticultural fleece to the ready to protect them if needed. Spread gently over vulnerable plants, its insulating effects will make all the difference. Young plants/transplants recently planted out into their final growing positions in the garden also need to be regularly watered and given protection from slugs until they properly establish.

If you’re adding a handful or two of slow-release granular fertiliser to pots or beds at this time of year to boost the longevity of summer bedding displays or increase productivity of edible crops in the allotment/kitchen garden, then try to choose an organically-acceptable type rather than the synthetic kinds which are bad for the soil as well as the environment. Irish-made examples of the former include the Fast Grow range (fastgrowfertiliser.com) and the Sea Nymph range (sea-nymph-ireland.com )

May is a great time to sow seed of biennial plants such as sweet William, foxgloves and honesty for lots of big, healthy plants that will flower for you next year. While it’s possible to sow seed directly in the garden, sowing into a well-prepared seedbed or into pots/trays will give better results and make it much easier to look after the emerging seedlings until they’re large enough to be moved into their final growing position. Seed of all of these biennial plants is widely available from good garden centres as well as from specialist online suppliers such as Mr Middleton (mrmiddleton.com) and Seedaholic (seedaholic.com).

Dates For Your Diary: