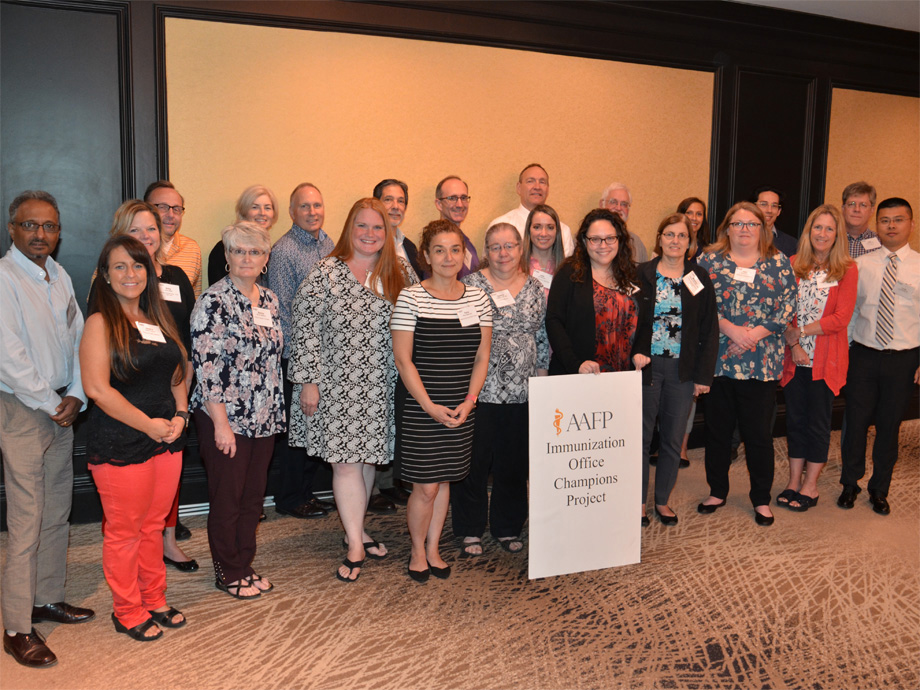 The CDC supported the office champions project with a four-year grant that ends in September.

The AAFP conducted the Adult Immunization Office Champions Project, which focuses on implementing the Office Champions Quality Improvement model, to educate family physicians and their health care teams about effective strategies to measure and improve adult immunization rates. Physician and nonphysician champions were essential to the project.

The AAFP recruited 25 family medicine practices and residencies in states and communities with low adult immunization rates to participate in the pilot phase of the Adult Immunization Office Champions Project. The practices were selected based on patient population, documentation capabilities and the administration of vaccines to adult patients age 19 and older.

Demographically, there were four rural, 13 suburban and eight urban practices. These broke down into 20 family medicine groups, three solo practices, one multispecialty group and one two-physician practice.

During the sustainability phase, the 25 practices demonstrated that they could sustain or improve adult immunization rates. A third measurement of chart reviews occurred in August 2018, covering Aug. 16, 2017, to Aug. 15, 2018.

Among the findings from the office champions project was that 79% of adults received the influenza vaccine in the practice setting.

Due to a shortage(www.npr.org) of GlaxoSmithKline’s recombinant zoster vaccine Shingrix, the rate for receiving this vaccine was suppressed to 46%.

More than 28% of patients who refused the herpes zoster live (Zostavax) vaccine said they did so due to cost or didn’t explain their decision.

During the wrap-up conference, Mark Sawka, M.D., of Woodhaven, Mich., said the No. 1 key to success in the project was buy-in from the staff of his solo practice to promote vaccines.

“It was important that this happened with every patient at every appointment,” he said. “Our policy manual also says that all staff have to be immunized.”

Sawka said front desk staff called and emailed patients from EHR-generated lists to remind them which vaccines they were due to receive. The group also sent mailers to patients and put posters from vaccine suppliers and the CDC that promoted vaccines in exam rooms.

“Prior to arrival for the patient’s first check-in, every patient’s super bill said what immunizations were covered by insurance and which were not,” he said, explaining that the front desk staff also handled this duty. “This eliminated the need to discuss with the patient whether or not a vaccine was covered.”

Sawka said standing orders with his office’s medical assistants also were helpful. “A lot of the time, people got their shots before I got in the room, and that was a wonderful thing — not going through the arm wrestling of it,” he said.

Melissa Tribuiani, M.D., of Newark, Del., said her Saint Francis Hospital-affiliated family practice sees many patients who are minorities and uninsured, and the practice also used a standing order program for medical assistants to administer vaccines.

Tribuiani said she will roleplay with family medicine residents how to talk with their patients about the importance of vaccines.

“I told them I had one patient who didn’t want the flu shot,” she said. “I told her, ‘You have four kids and you’re a hostess at the Olive Garden — everybody in the world is going to come cough in your face.'” The patient got the vaccine.

Harder said the office champions project led the group of physicians to be more vigilant about vaccines and even go as far as to create a policy statement on immunizations that is available on the group’s website.

“This includes the fact that we decided we won’t sign anybody’s form that exempts them from getting immunizations for whatever reason,” he said, later clarifying that the practice expects to give some leeway for necessary medical exemptions. “We are going to try to hold ourselves to that standard.”

During a Q&A session, Harder elaborated on the policy statement, saying patients are asked to sign a form when they refuse vaccines for themselves or their children.

Richard Veerman, M.D., of Johnson City, Tenn., said East Tennessee State University Family Medicine Associates, where he practices, never received the Shingrix vaccine, which was already hard to find due to the shortage. Instead, he said, it was distributed to local pharmacies, which made it harder to record if patients received the vaccine or not.

“In our area, people have been on waiting lists for Shingrix for at least six months, so that’s still a struggle,” Veerman said. “We keep sending prescriptions for them in, hoping they will have the vaccine at some point. Additionally, at least half of our patients couldn’t afford the Shingrix vaccine.”

Sawka said it also was a challenge for his clinic to verify with outside resources such as hospitals and pharmacies which vaccines had been given to his patients. But his staff tracked them all down.

Sawka added that sometimes, patients would refuse vaccines, claiming they’d received the immunization previously. In these cases, the practice used the same process to track down whether — and where — the vaccine had been received.

He also mentioned the barrier of needing to dispute anti-vaccination propaganda that’s been circulating in the United States.

Tribuiani said she faces the challenge of her practice’s affiliation with a hospital, which requires accessing patient vaccine information in three different EHR systems at once, although there’s a plan for this to be streamlined in two years.

Finally, Kimberly Allman, M.D., of Family Physicians of Kansas in Andover, Kan., drove home the importance of getting the whole staff’s buy-in for immunizations to be successfully championed at the office level, an effort that includes empowering nurses and medical assistants to give vaccines.

“If you have anyone who undermines the idea that vaccines are important, then you are in trouble and it’s harder to get people to vaccinate,” she said. “Also, if medical staff is doing the work themselves and are positive and proactive about it, I think it makes a difference.”