Home Garden How to win show prizes with your fruit and vegetables, by a... 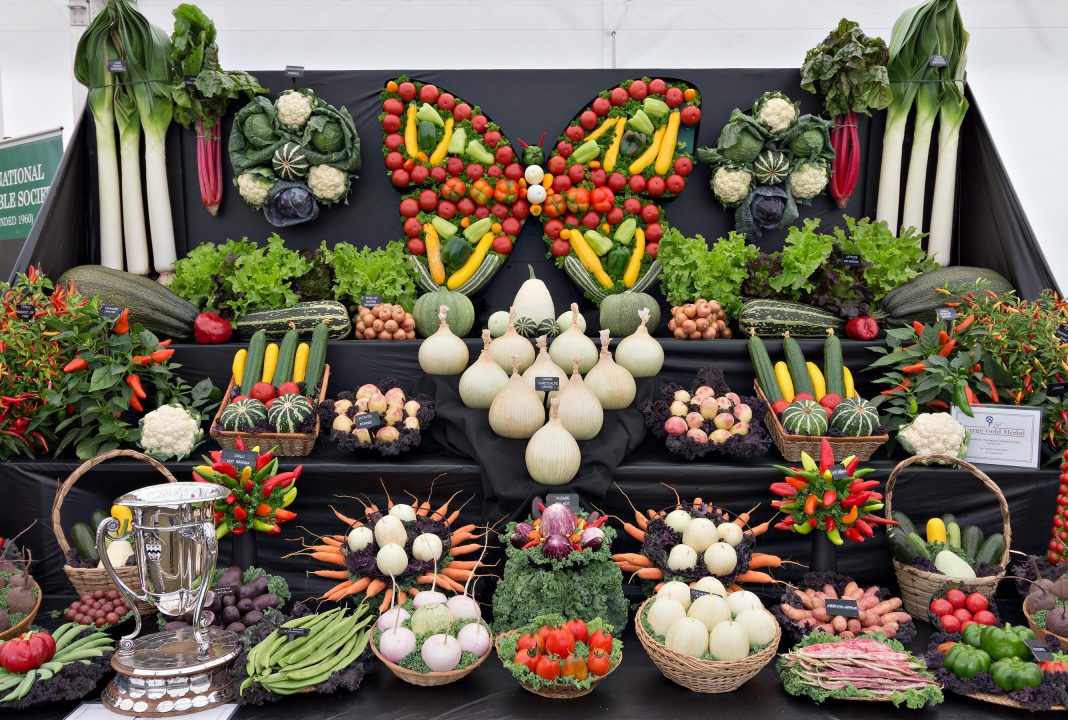 Steven Desmond has seen it all — and done most of it, too — when it comes to fruit and veg shows. He shares some of the tricks and tips he’s picked up along the way.

The national enthusiasm for growing our own fruit and vegetables, which waxes and wanes with the generations, is presently at a high pitch. The making of seedbeds, the ripening of onions and the relief when the first frost brings an end to the glut of runner beans are all part of a superior form of self-education, which reconnects us with the important things in life, such as fresh air and dirty fingernails.

The unfailing wonder at producing things we can eat from packets of seed can often be the first step on the road to success on the show bench. All over Brit- ain, the month of August ushers in fêtes, shows and feast days, a key ingredient of which is typically a horticultural show of some kind.

Everybody crowds in after lunch, when the judges have done their work, to inspect the neat rows of vegetables with here and there a winner’s card. Old so-and-so usually does well and walks away with a trophy or two and it would be easy to imagine that all this apparent perfection is the work of some magic circle that mere mortals could never hope to enter.

It’s not so. I distantly remember my first go, which included three sticks of rhubarb (Cawood Delight, since you ask), which I cut from my solitary year-old plant at the end of the garden and trundled in my wheelbarrow to the school hall. The judge said afterwards — not to me, but to my expert neighbour — that it was the best rhubarb he’d seen on a bench in Yorkshire that year.

He gave me a red card, which, unlike its footballing equivalent, meant I had won first prize. My neighbour Len gave me a smile and a nod. We ate the prize-winner, with custard, that evening. It was served with a faint suggestion of reverence.


That occasion taught me three things about showing. First, that you will only win if you enter. Second, that it isn’t difficult. And third, that it isn’t easy either: there’s a bit of forethought, a best way of going about things and the need to watch and learn. My immediate response to winning, apart from surprise, was a desire to do it again.

When I judged my first show a few years later, the biggest difficulty was separating the best entries into first, second and third place. The standard was very high and I remember patiently examining every detail while the steward to my left grew visibly more anxious, as there were dozens more classes to come.

However, there always is a winner and, in a good year for, say, redcurrants, there will be lots of entries in that class.

A prize-winning vegetable trug basket at the Malvern Autumn Show in Worcestershire.

The chief myth among the uninitiated is that whoppers always win. In fact, prizes go to those that match the wording in the schedule, that are fresh and unblemished, typical of their kind, regular and uniform. Time spent in the kitchen that morning matching up sets of French beans is never wasted. The scuff on the underside of your courgette will always be spotted by the judge, who half expects it.

In short, perfection doesn’t exist. You just put in the best you have and hope that those of your rivals are slightly worse.

Another popular myth is that victors guard their secrets and take them to their graves. There will always be one or two curmudgeons who pretend to such practices, but most exhibitors are only too willing to point newcomers in the right direction.

I sometimes get approached sheepishly after a show to ask why a dish of damsons came second rather than first and the answer is usually something to do with presentation. Of course, the fruits were superbly regular and free from russetting, but the winner had handled theirs with such care that the lovely grape-like bloom was intact, whereas in all others, it had largely been rubbed off. Attention to detail will always make the difference.

The freshness principle is always a tricky one. Your carrots were gleaming early that morning when they were first prised, with infinite caution, from the dewy earth, but it will be early afternoon before the public gets to see them.

Put them on the bench, newly damp, as late as you reasonably can before the stewards clear the hall for judging. When you overhear visitors commenting later on that they have better than that at home, comfort yourself with Sibelius’s observation that no one has ever put up a statue to a critic.

Ahead of this week’s Egton Bridge Old Gooseberry Show, Steven Desmond spoke to competitors at this centuries-old event.