Home Garden Monadnock Ledger-Transcript – At home stormwater management is easier than you might... 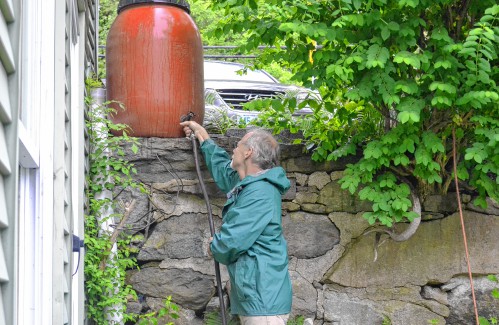 Did you know that a quarter inch of rain coming off a 400-square-foot roof can produce roughly 63 gallons of stormwater?

It’s true. Robert Wood did the math and he knows a little something about water and how to collect it. At his Peterborough home, Wood, better known as Woody, has a two, 55-gallon barrel rain collection system that provides enough water that he almost never has to use another resource to properly hydrate his expansive garden setup of fruits and vegetables.

After buying the Union Street property more than 17 years ago, one of Wood’s first projects was to install a system that would allow him to use Mother Nature as a resource – and all but eliminates any increase to his water bill.

“I never use town water for gardening purposes,” Wood said.

Wood, who is a member of the Peterborough Conservation Commission, started by having heavy duty gutters installed. The downspouts are positioned to feed into the top of each barrel, through a metal screen to keep out maple seeds, pine needles and whatever else comes off the roof.

Since Wood’s property is on a hill, it allowed him to create a gravity fed system that is all connected. There’s one barrel near his street-level driveway that collects from the front section of the roof and other is located down below where water from the back roof is stored.

While both barrels collect water when it rains, Wood estimates the top barrel gets a little bit more because of the roof area, but it’s hard to really tell. That’s because the two barrels are connected so when the top one is full, it overflows to the one below. When the bottom barrel reaches capacity, it also has an overflow spout that feeds to a dry well underneath it to put the water into the ground and not down a drain.

“Doing something with the overflow is important with a system like this,” Wood said. “It replenishes the water table.”

He has a connection valve to the top barrel where he can connect a hose and a spout on the bottom one.

“I can directly water my garden that way or fill watering cans,” he said.

Wood spent his entire career working in water resource protection. He was with the Lake Sunapee Protective Association for 20 years dealing with everything from watershed and wetlands protection to research and education around water as a resource. He helped establish a stormwater collection system at the association’s headquarters and has created some version of one wherever he has lived.

“I’ve always been interested in water resource management. That’s what my education is in,” Wood said.

Over the years, he’s made improvements, but for the most part his system is rather easy to manage. He typically sets it up in April and has it going through the end of October. Wood said he could probably have four barrels with all the water he collects, but having two has worked out well.

“You’d be surprised how much rain comes off a typical residential roof,” Wood said.

The maintenance consists of cleaning the screen when needed and rinsing out the barrels when they are empty to prevent bacteria and fungus build up. And he lets gravity do all the work for getting the water to where it needs to be.

The key is to keep the water moving and not let it stay too long.

“You really don’t want to store water in there very long. You want to use it,” he said.

Wood believes everyone could maintain a collection system.

“If you have a couple barrels and a small garden, that should be enough to water your garden if you do it right.

Francie Von Mertens also has a collection system at her Peterborough home, although it requires more work that Wood’s. She has one 32 gallon barrel that collects from her barn roof and a series of 5-gallon buckets strategically placed below her roof line.

“I’ll find anything that collects water off the eaves,” Von Mertens said.

She doesn’t do it for financial reason – since she’s not on town water – but more from an environmental standpoint.

“It keeps me mindful of how lucky we are to have fresh water and I don’t take it for granted,” she said.

When she’s carrying around her buckets of water, which she also brings with her to water some of the town gardens, she thinks of the people around the world that have to travel great lengths to collect fresh water.

“It makes sense environmentally for what is an amazing resource,” Von Mertens said. “Where water quality is in the news a lot, we are so lucky to not have that as an issue.”

The State of New Hampshire offers tips on how to get started on at home stormwater management system at www.des.nh.gov/organization/divisions/water/stormwater/stormwater-mgmt-homeowners.htm.