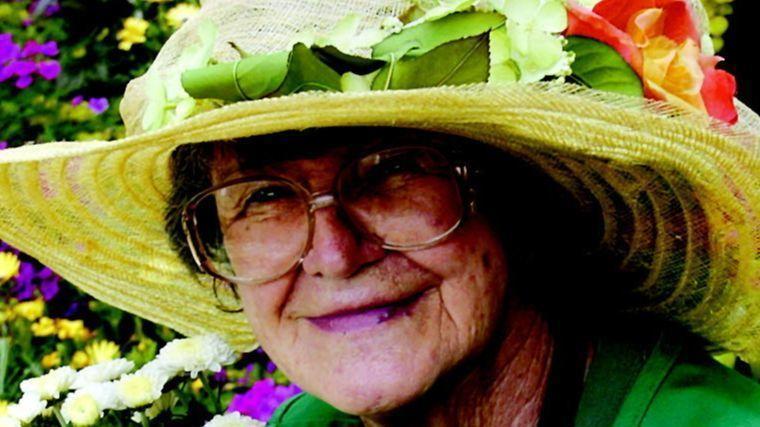 Rosemary C. Easley, a Master Gardener who was a mainstay for more than three decades at the old Garland’s Garden Center in Catonsville, where she was known for her colorful millinery, died April 5 from respiratory failure at St. Agnes Hospital.

The longtime Catonsville resident was 93.

The former Rosemary Catherine Martin was born and raised in Chicago, the daughter of Anthony Martin, an accountant, and Sophia Martin, a homemaker.

After graduating in 1943 from the Academy of Our Lady, she enrolled at Mount Scholastica College in Atchison, Kan., from which she earned a bachelor’s degree in 1948 in English literature, with a minor in dramatics, and later received a teaching certificate from Chicago Teachers College.

Also while attending college during World War II, she worked as an expeditor with the Navy’s Inspector of Material from 1943 to 1945.

In the late 1940s, she established the Beverly Nursery School in Chicago, and after it closed, taught kindergarten students at St, Margaret of Scotland, also in Chicago.

Mrs. Easley returned to Mount Scholatica in 1958, working as a research assistant at its Tape Institute, performing psychological research, recording scripts and sending tapes to teachers for electronic classrooms.

In 1959, she married Ray E. Easley, a policy writer for the Social Security Administration, and in 1962 the couple moved to Baltimore when he was transferred to SSA headquarters in Woodlawn.

Mrs. Easley’s love of gardening bloomed during the years she was a communicant of the now-closed St. Lawrence Roman Catholic Church in Dickeyville, where she was in charge of landscaping for the parish.

She also volunteered at the church, was a Eucharistic minister, and headed the parish’s Confraternity of Christian Doctrine program.

After St. Lawrence closed, she became an active communicant of St. Gabriel Roman Catholic Church in Windsor Mill, where she served as a member of the Social Justice Committee, which worked to unite diverse cultures within the church and surrounding community.

In 1972, Mrs. Easley embarked on a 32-year career at Garland’s Garden Center on Ingleside Avenue in Catonsville as a member of its sales staff who worked advising customers about plants and gardening, and who was easily recognizable by her colorful hats decorated with flowers.

For more than 15 years, she planned and led tours of the garden center for local schoolchildren, and during the 1990s, she also worked for the University of Maryland Extension Service, advising gardeners on a wide range of topics, such as the proper PH for soil, splitting perennials and fighting garden pests.

A skilled organic Master Gardener in her own right, Mrs. Easley was using fish scales and emulsions from her fisherman husband’s catch to fertilize her own garden long before it was popular to do so.

“She was well known not only for her extensive expertise but for her whimsical storytelling, patience, and exuberant personality,” according to a biographical profile compiled by her family.

A great proponent of the benefits of gardening, Mrs. Easley told The Baltimore Sun in 1997 that “people find it relieves their stress.”

Mrs .Easley’s various garden tips were published in Garland’s newsletter, as well as such publications as The Baltimore Sun, Catonsville Times and The Catholic Review.

She also wrote a monthly column, “The Rambling Rose,” in the community association’s newsletter, and was a frequent guest on Stu Kerr’s call-in gardening program, which aired Saturday mornings on WCBM Radio.

She lectured frequently at garden clubs, the Maryland Home and Garden Show, Baltimore Herb Festival, and the Horticultural Society of Maryland.

Mrs. Easley retired from the garden center in 2004 when she turned 81.

She volunteered at the Senior Center in Catonsville and Mosaic Community Services, who named her Volunteer of the Year in 2007.

At Mosaic, she presented classes to help associates relieve the stress that accompanies mental illness. The Baltimore County Commission on Disabilities recognized her volunteerism, and in 2009 she was presented the Baltimore County Volunteer of the Year Award for sharing her gardening skills with the mentally ill.

Mrs. Easley and her husband, who died in 1995, enjoyed the outdoors and taking their family on camping trips.

Since 2012, she has been a resident of the Charlestown Retirement Community in Catonsville.

A memorial Mass will be offered at 11 a.m. June 11 in Our Lady of the Angels Chapel at Charlestown, 719 Maiden Choice Lane.

She is survived by a son, Marty Easley of Catonsville; four daughters, Kathleen M. Stewart of Catonsville, Celeste Easley of Timonium, Renee Trapani of Lutherville and Rose-Marie Adams of New London, N.C.; and six grandchildren.