Home Garden The call of the hornbill 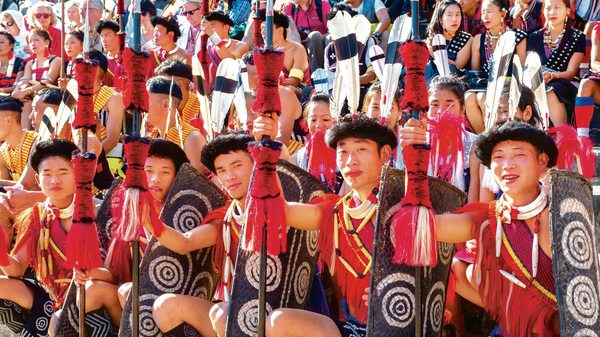 Easterine Kire’s book on the tribes of Nagaland, Walking The Roadless Road, begins and ends with hat tips to two physical spaces that have become symbols of reconciliation in a society still coming to terms with its fault lines.

The prologue tells us about peace activist Niketu Iralu’s Kerünyüki, or Listening House, an “elegant structure of native stone and wood (that) sits on a hill slope facing the Kohima Ridge”. Iralu and his wife Christine encourage their guests—often members of groups smarting from political injustices—to have open and honest conversations about their grievances.

The epilogue describes the philosophy of historian Visier Sanyü’s “Healing Garden”—a “sustainable community garden” that offers respite from, and an alternative to, the scrappy boomtown of Dimapur, some 26km away along NH 29. Inspired by his fellow Angami clansman Iralu, Sanyü’s initiative is also aimed at “healing the communal and individual memory of the Nagas”.

In January, when I spoke to Iralu in connection with a story, he said: “People have to understand that we (the Nagas) are still a young society. It is almost like we have just come away from the fireplaces in our villages that were isolated in the hills. And we are responding to an Indian civilization that is some 6,000 years old.”

The title of Kire’s book is taken from something Iralu (his influence among Nagas can’t be stressed enough) said to her, and reflects the idea that since the Nagas’ first encounter with a modern political consciousness about a century ago, everything has happened for the first time—so the Nagas have been “walking the roadless road”.

Kire herself has notched up a number of admirable firsts. She was the first Naga writer to publish a collection of poems (Kelhoukevira, in 1982) and a novel (A Naga Village Remembered, 2003) in English. Since then, she has written a number of novels and won the HinduPrize for Fiction in 2015 for When The River Sleeps. Her fictional project has typically centred on the documentation of Nagaland’s uncountable oral narratives and myths.

The many years of research and challenging travel in the districts of Nagaland also inform Roadless Road—its meatiest section is an overview of the society and culture of the 16 tribes that live within the borders of the state (there are other Naga tribes wholly in the territory of Arunachal Pradesh, Manipur and western Myanmar).

However, this section is hardly bedtime reading. The detailed anthropological notes on subjects like family structure, birth rituals and taboos are not for the general reader but may prove useful for those with more than a casual interest in the state.

Whether or not it manages to hold your attention, the sense that this overview conveys is that this “young society” has an involved and intricate past. It is also a reminder that while the tribes have some things in common with each other, there are also several differences. For the outsider, these are ostensibly matters of nuance. For a Naga, they are markers of identity.

To a significant extent, it explains why the movement for a separate Naga nation has consistently been riven by factionalism. To understand Nagaland is to understand its tribes.

In shorter sections on either side of detailed profiles of the 16 tribes, Kire lays down the context and consequences of this complex inter-tribal equation. Lay readers are likely to find these sections more accessible. Free from the rigour of academic convention and deploying the storyteller’s instinctive understanding of Naga narrative, Kire suggests that “oral origin myths should not be dismissed” since “many answers to the mystery of Naga origins are being discovered in the stones and trees that the tribes pointed out as their birthing places”. Though this “connection between folklore and archaeological discovery” remains buried in this voluminous tome, it is a topic that will undoubtedly take on more flesh and colour in the future.

One also wishes there was more colour to the section dealing with Christianity and Naga society. Nagaland may be understood by its tribes but the Naga, at the level of the individual, is so often guided by faith. It is exactly 150 years since Edwin W. Clark of the American Baptist Mission met some Nagas who had come down to trade in Sibsagar (in Assam), and the rest, as they say, is history.

Roadless Road contains short paragraphs on the conversion histories of each tribe, but does not go into much detail about the Church’s influence on the conflict with the Union government post-1947. The chapters on the insider-outsider dichotomy and “Nagas In The 21st Century” give the reader a taste of the challenges faced by contemporary Naga society but don’t really interrogate them fully—one hopes that the prolific Kire has left this analysis for another book.

Following the Central government’s recent actions in Kashmir, there have been alarmist reports in the media about the fate of Nagaland and its special status in the union. However, the way Nagaland’s situation has evolved, the prevailing sense is that the demand for a separate nation is no longer non-negotiable. The mandarins of the Union home ministry will be well aware that Kashmir and Nagaland are like apples and oranges, quite literally too. Dip into Kire’s book, with its arresting cover designed by Bena Sareen (don’t miss the hornbill), to understand why.