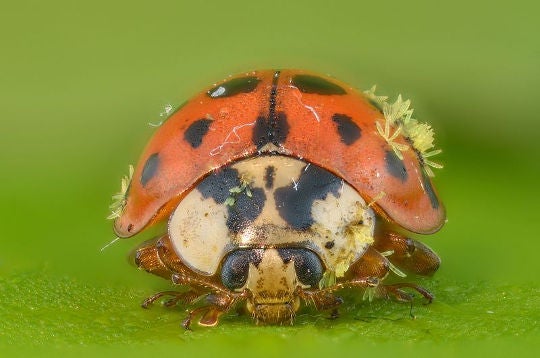 Ah, spring. The flowers are blooming, the bees are buzzing, and the labouls are sprouting. Unfortunately if you are a ladybug, they are sprouting from your hindquarters.

Welcome to the world of the Laboulbeniaceans (labouls for short), a group of insect-parasitizing fungi/STDs with no mammalian equivalent. Imagine, if you will, that instead of forming a red, burning itchy patch on your skin, pathogenic human skin fungi sank a nutrient-absorbing holdfast into your flesh and then sprouted an ornate, club-like structure. Now imagine a whole field of them on your arm or leg, each shooting or oozing infectious spores.

Here is just such a field on a hapless ladybug:

If you can believe it, there are at least 2,000 species of these things – that we know of. As you can imagine, there aren’t a lot of scientists actively involved in hunting and describing new ones.

These fungi are so odd that for many years (in the pre-molecular biology era), a whole contingent of scientists argued they were related to red algae. One species was first identified as a parasitic worm of bat flies. It’s not every day that scientists get the kingdom wrong … twice.

The majority (a mind-boggling ~1,260 species) were first described and illustrated by the scientist Roland Thaxter, working at Harvard in the late 19th and early 20th centuries. His Haeckel-like artistic output documenting the  variety of these fungi is stupefying (please take a glance through these – they are amazing as works of art in their own right as well as samplers of diversity. If you look closely at the bottom of each of his works there is an entomomorphic RT monogram that is also highly reminiscent of the more famous monogram used by J.R.R. Tolkien.)

As you might expect for a group with 2,000 members, labouls infect a huge variety of insects. But according to one mycology text, the best way for a student to find them is to start with one of the most mundane: the biology building’s resident roaches, who commonly have labouls dangling embarrassingly from their antennae.

Once a spore lands on a new host, it germinates and sinks a peg-or root-like nutrient-absorbing tube into the exoskeleton of its host and sometimes into its flesh. It then blossoms into a bouquet of male genitalia and sometimes also sterile, occasionally extravagent brush-like structures. The male structures produce mobile reproductive cells called spermatia.

A second arm (sometimes, a separate organism) produces a club-like structure with a receptive filament at its tip. If a spermatium lands on this filament, it will fertilize the structure, which will go on to produce a chamber packed with long, skinny two-celled spores. Here are but a few examples, courtesy of Roland Thaxter.

If this seems vaguely familiar, there’s a reason. Flowers have the same basic design. Labouls are essentially parasitic fungal flowers, minus petals. The spores escape when the encasing structure liquefies (ugh), or may be ejected from the chamber via a hair trigger tip, not unlike the seeds of jewelweed.

The whole cycle restarts next time the host insect knocks the boots. (In the case of ladybugs, that’s once every two days, which could help explain why they are so prone to STDs(!). Ladybugs are among the “most promiscuous of insects”, a rather shocking libido in an insect often viewed as the height of garden decorum). Some spores may also find their way to new hosts when insects swarm, or possibly when picked up from a surface.

Because labouls are primarily transmitted by sex –and because insects apparently have extraordinarily monotonous sex lives – labouls often appear fiercely loyal to certain host body parts. Some seem to always appear on certain sides of certain legs of their hosts. Sometimes, for obvious reasons, the position is consistent but different between genders.

It should be said that labouls don’t kill their hosts outright, who, being insects, tend to expire of other causes first. Labouls are also quite unusual among fungi in that they never manufacture a mycelium, a cobwebby body that is a nearly universal fungal trait. The mycelium’s usual function is to increase the fungus’s surface area for digestion; more mycelium = more food.

The lack of one in the Laboulbeniaceae may be because they don’t germinate unless they’ve landed directly on dinner, the consumption of which involves approximately the same effort as tapping a Capri Sun.

Labouls do have one advantage from the perspective of their hosts: since they are permanently attached, they can’t serve as vectors for other diseases (unlike, say, mosquitoes or ticks). As parasitic hood ornaments go, it could be a lot worse.