Home Garden Tomatomania! returns to Ventura County with a rainbow of varieties 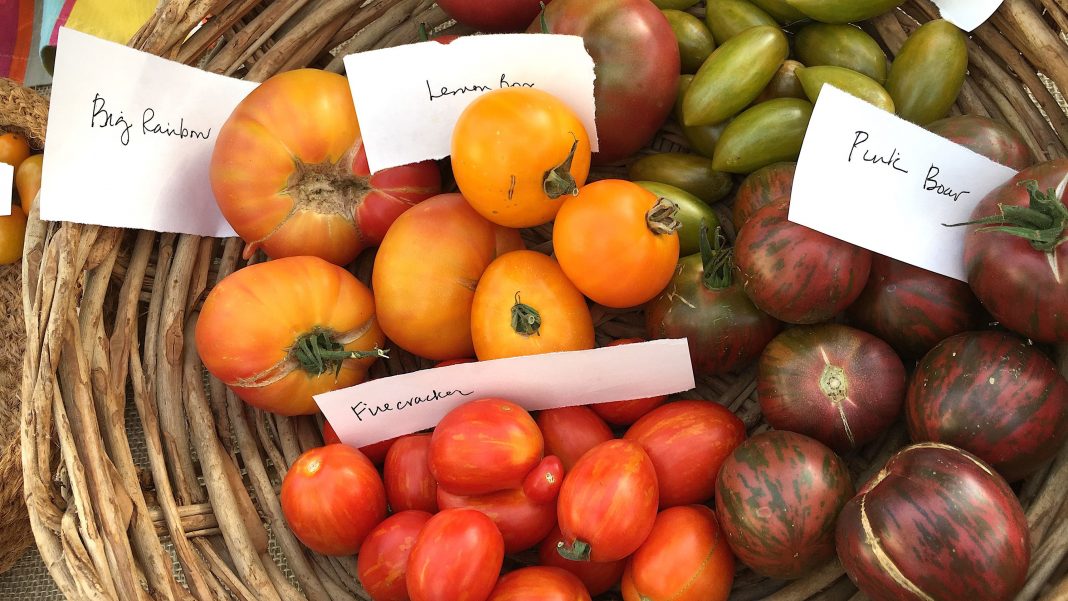 To taste a rainbow’s worth of home-grown tomatoes this summer, be sure to get your plants in the ground in spring, says Scott Daigre, the Ojai-based co-founder of the seedling sale Tomatomania! Fruit from his test garden was featured during a tomato tasting party. (Photo: LISA MCKINNON/ THE STAR)

It’s an unavoidable fact of backyard garden-to-table eating that, if you want ripe, juicy tomatoes in summer, you should get your plants into the dirt in spring.

Enter Tomatomania!, the seedling sale co-founded nearly 30 years ago by Scott Daigre when he was working as a landscape designer in Pasadena. Billed as the world’s largest tomato-plant sale (hence that exclamation point), the touring event added Ventura County to its itinerary in 2009, after Daigre moved to the Upper Ojai and started a tomato test garden at his home.

For its 10th anniversary in the region, Tomatomania! is making its annual return with seedling sales this month and next in Fillmore and Ojai, to be followed in August by Tomatomania-themed tasting events at The Farmhouse, the new epicurean events center at the Ojai Valley Inn, where Daigre serves as culinary gardener artist-in-residence.

MORE: Pick your own blueberries at One Acre Farm near Camarillo

The spring events will feature free classes and sales of fertilizers, tomato cages, Tomatomania! T-shirts and as many as 140 varieties of hybrid and heirloom seedlings and plants, the latter sold in 4-inch pots and 1-gallon containers for about $5 and $9 each.

Among them is Daigre’s pick for Tomato of the Year: Pigletwillie’s French Black.

“It’s a saladette, which means it’s about double the size of a ping pong ball. It’s black with green shoulders and a lovely rustic red-brown interior, with a faintly smoky taste,” said Daigre. “We started testing it about three years ago and found that it works when you plant it where it’s hot and can be grown near the beach in containers. It just works. That’s the kind of pedigree we want.”

Tomatomania! co-founder Scott Daigre will bring the seedling sale to Otto & Sons in Fillmore on March 22-23 and to Topa Mountain Winery in Ojai on April 6. Plants will also be available on select dates at Underwood Family Farms in Somis and Seaside Gardens in Carpinteria. (Photo: CONTRIBUTED PHOTO)

Gardeners can be on the lookout for Pigletwillie and Madame Marmande, the 2018 Tomato of the Year, when Tomatomania! takes place 9 a.m. to 5 p.m. March 22-23 at Otto & Sons Nursery in Fillmore (1835 E. Guiberson Road). Pepper plants and rose bushes will also be in plentiful supply.

Test gardener Mark Donofrio, of The Starter Farm in Santa Ynez, will discuss “Key tomato tips for a summer filled with fruit” at 11 a.m. March 22, followed by “Growing tomatoes in California: The challenges of high heat and cool coasts” at 11 a.m. March 23.

Another full-fledged Tomatomania! event is slated for 9 a.m. to 4 p.m. April 6 at Topa Mountain Winery in Ojai (821 W. Ojai Ave.), where gardeners will have the option of sipping an afternoon glass of rosé of grenache while wandering through aisles of alphabetized tomato plants. At 11 a.m., Daigre himself will lead a talk titled “Tomato varieties for the Ojai Valley and keys to success.”

Selected varieties will also be available during “partner sales” March 23-24 at Underwood Family Farms in Somis (with plants available through April 14) and April 6-7 at Seaside Gardens in Carpinteria (with some plants available as early as March 23).

Tomatomania! test gardens in Ventura and Santa Barbara counties produced a rainbow’s worth of fruit for a summer-tomato tasting party at a private home. (Photo: LISA MCKINNON/ THE STAR)

Come summer, the fruits of Daigre’s tomato-planting labors at The Farmhouse will be ripe for the tasting during gatherings on Aug. 6 and 13. Daigre refers to the separate events ($125 each) as “tomato celebrations” that will include lunch, gardening tips and fresh-from-the-garden juices and/or Bloody Marys.

Home gardeners and farmers-market shoppers also have the option of trying any of the 20 recipes included in the official “Tomatomania!” book, first published in 2015.

“We’ve definitely proved that there’s interest in tomatoes beyond the nursery where Tomatomania! was started all those years ago,” Daigre said with a laugh.

Read on as Daigre answers questions on topics ranging from the best-selling variety in Tomatomania! history to which culinary superstar he’s most looking forward to meeting during The Farmhouse’s first season of events.

Q: How has Tomatomania! changed through the decades?

A: “In the early ’90s, it was all about the heirlooms. It was like opening a Pandora’s box for gardeners, because there was a treasure trove of varieties out there already being shared by people who had been collecting seeds and passing them down.

“What we’re seeing now is the hybrid coming back into vogue. Major seed companies are coming out with tomatoes that have stripes and different shapes. They’re introducing these beautiful, interesting looking and tasty tomatoes that offer more disease resistance, more production.

“The newest fascination is with blue tomatoes. It sounds strange, but it’s a good thing: They contain the same beneficial antioxidants that you find in blueberries. Hybridizers started breeding a wild species with a purple tomato, and, lo and behold, we now have tomatoes like Blue Beauty, a large pink fruit with a phenomenal blue cloak over its shoulders.”

Q: How does the vibe differ from one Tomatomania! location to another?

A: “The flavor and the spirit should be the same. We want to get the basics down by offering the classic heirlooms, like Cherokee Purple, and then go rogue with some of our more wacky varieties, like Brad’s Atomic Grape, an elongated green cherry tomato with purple and orange stripes. The selection can range as much as 30 percent from location to location. We have people who follow us to multiple locations, because they know the selection can vary so much.”

Q: What has been the best-selling tomato variety so far?

A: “It’s a little orange-cherry tomato called Sungold. We’ve tried to find something even better to unseat it, but people keep coming back to it. They love it, and you can’t argue with that.”

Q: We’ve had so much rain recently. Will that affect how people plant their tomatoes this year?

A: “It shouldn’t affect planting time, but it could affect soil prep. Moist soil is more active soil, because organic materials have an easier time of breaking down when moisture is there. You don’t want to sit on that. Plant now and take advantage of all the moisture that’s there to help your tomatoes get established. You want to get your plant into the soil so it can flower and set some fruit before the real heat comes on. But tread lightly to avoid compacting the soil.”

MORE: Chef Nancy Silverton to head culinary events at The Farmhouse in Ojai

Q: How did your post as culinary gardener for The Farmhouse at the Ojai Valley Inn come about? What does it involve?

A: “I was lucky enough to be there early in the conversation when they started talking about wanting a venue that could offer a variety of farm-to-table culinary opportunities. I think I sent them way too many emails with ideas, and one thing led to another.

“I designed a garden of 11 raised beds with plantings meant to inspire the kitchen and some of the educational programming at The Farmhouse. Right now we’re in the process of going from a garden of greens to getting ready for summer, which will include tomatoes, for sure.”

Raised beds planted with lettuces and herbs are seen at The Farmhouse, the newly opened epicurean events center at the Ojai Valley Inn. (Photo: LISA MCKINNON/ THE STAR)

Q: The Farmhouse will host events featuring dozens of culinary heavy hitters now through the end of the year. This may be impolitic to ask, but, who are you most looking forward to seeing in Ojai?

A: “My brain is pretty focused on tomato plants right now, so it’s a bit of a blur. But (the James Beard Award-winning food writer) Ruth Reichl is coming (on Sept. 21) and I can’t stand it. I have all of her books. That’s the one that immediately leapt out at me.”

For more about Tomatomania!, click on https://tomatomania.com. For a schedule of events at The Farmhouse, go to https://www.ojaivalleyinn.com/farmhouse.

March 20 is more than the official launch of spring. It’s also the date for two culinary events at opposite ends of the pay scale.

On one side is Free Cone Day, which will take place during regular business hours at participating Dairy Queen locations in Oxnard (Shopping at The Rose, 1941 N. Rose Ave., Suite 720) and Simi Valley (1368 Madera Road, Suite P2-4). The offer is for one free small vanilla soft-serve cone per customer, while supplies last.

After Free Cone Day festivities, participating DQ sites will offer a small regular or dipped soft serve cone for 50 cents from March 21-31 for patrons who have activated the DQ mobile app. It includes a choice of the classic chocolate dip or the new DQ orange dreamsicle dip (https://www.dairyqueen.com).

If you’re feeling flush, you might consider springing for a seat at an upcoming Outstanding in the Field outdoor dinner. The spring/summer 2019 schedule of California events includes stops at farms, wineries and what’s billed as a “secret sea cove” near Santa Cruz, with ticket sales starting at 9 a.m. March 20.

The schedule bypasses Ventura County this season, but events are planned just to the north and south of us.

Tickets go on sale March 20 for the ONLY in-the-805 dinner on the @Out_intheField schedule for spring/summer 2019. Features chefs Greg Ryan and Daisy Ryan of Bell’s Los Alamos, June 4 at @GaineyVineyard in Santa Ynez. https://t.co/QIqiifFZNdpic.twitter.com/80MDj25aCK

The former includes a June 4 gathering ($265 per person) at Gainey Vineyard in Santa Ynez with fare by Greg Ryan and Daisy Ryan, the husband-and-wife chefs/owners of Bell’s in Los Alamos.

The latter includes a May 26 benefit for the Los Angeles Regional Food Bank that will feature a menu by Tim Hollingsworth of Otium and Susan Feniger and Mary Sue Milliken of Border Grill ($265). Chefs Steven Fretz and Marcel Vigneron will prepare plant-based dishes for a June 2 dinner at Wattles Farm Community Garden in Hollywood ($265).

The Ojai Valley Lavender Festival is nearing its final bloom.

Citing the lack of new members to “join the organization and lead it into the future,” members of the nonprofit Ojai Valley Lavender Festival, Inc., have announced that the event featuring demonstrations, entertainment, food, handcrafted wares and more will cease production after the 16th annual festival takes place June 29 in Ojai‘s Libbey Park.

Applications are due April 19 for the event’s final David Mason Scholarship, named for the late Ojai Valley historian and awarded to Ventura County residents pursuing work in agriculture and/or the beneficial uses of lavender.

OPEN, SHUT AND IN BETWEEN

In case you missed it, the Open & Shut column published in the March 9 Business section of The Star contained information on the debuts of Vegan Thyme in Newbury Park, Made in Italy in Thousand Oaks and Firehouse Subs in Ventura, the replacement of Darband Grill by Sadaf Restaurant in Thousand Oaks, and the coming-soon status of Seven Spice Kitchen in Newbury Park and Peet’s Coffee in the North Ranch Mall in Thousand Oaks. To read it, click on https://bit.ly/2CbwJfT.

DIG IN: Keep up with Ventura County’s ever-changing culinary scene with a digital subscription to The Star.

Lisa McKinnon is a staff writer for The Star. To contact her, send email to [email protected]