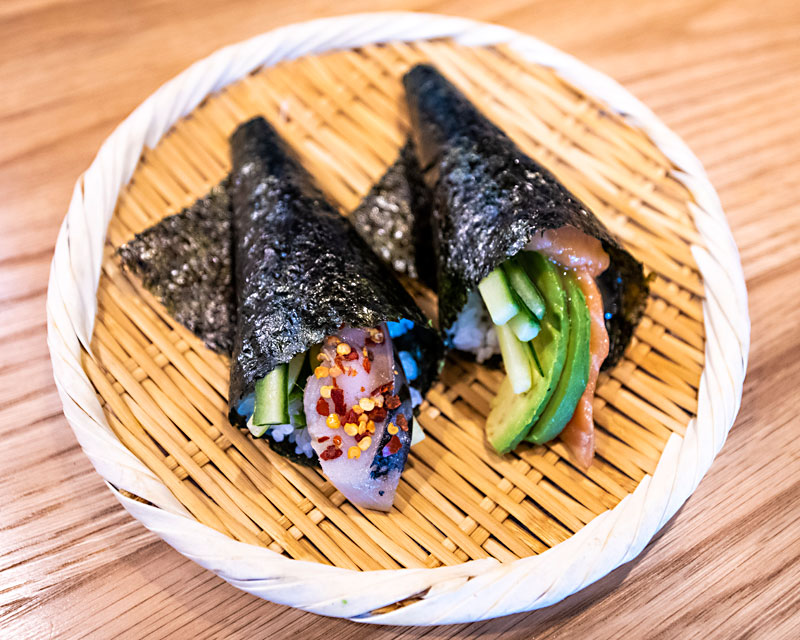 When I landed in Tokyo last year equipped with limited knowledge of Japan, I assumed I’d alternate between eating sushi and ramen each day, sleep in MUJI-styled spaces, and frolic between the leafy rows of tea farms. Only the latter came true. In fact, in three weeks traveling across Japan, I ate sushi and ramen one time each. My meal times were instead spent discovering a whole world of food: noodles – served cold or hot, with or without broth; meats – grilled, fried, or DIY-cooked tableside; colorful seafood and pickled or seared vegetables; countless rice-based snacks; and most surprising, a bowl of warm, rich Japanese curry.

Back in Austin, I’ve been clinging to what I can grasp of Japanese culture by binge-watching episodes of Terrace House, a Japanese reality TV show, and reading books like Wabi Sabi to gain further exposure to a culture I can’t get enough of. Most importantly, I’ve eaten my way across Austin seeking the best options to taste my way back to Japan. Beyond sushi bars, there are a number of traditional restaurants and izakayas (casual pubs) to choose from, so I’ve gathered some of the best classic Japanese dishes and where to find them.

One more thing: While strolling through the morning market of a small mountain town called Takayama, I spotted a Fudgsicle-looking treat called gohei mochi – cooked white rice shaped onto a Popsicle stick, covered with a sweet miso sauce, and baked. It was both savory and sweet, and perfect as a snack (or in my case, breakfast). If anyone hears of this treat landing in Austin, send word, because it’s oishii – delicious.

Tempura: It’s baffling how the interior ingredients stay freshly intact and perfectly cooked without being weighed down by the delicately fried exterior. Both Komé and Fukumoto nail traditional plates, including vibrant tempura pumpkin, squash, Brussels sprouts, and okra.

Edamame: Kemuri Tatsu-ya has set a new standard for what was once a mindless order. The Texas-infused izakaya cold-smokes black edamame over cherrywood and finishes them off with a special seasoning made up of togarashi (a popular Japanese spice blend), giving it a mouthful of heat and smoke.

Gyoza: Dumplings! Ichiban may be the oldest Japanese restaurant in Austin and has the unique characteristics to match – an outdoor koi fish pond and indoor seating at zashiki, traditional-style tables set low to the ground. The gyoza are fried to perfection and stuffed with a moist beef filling, easily washed down with sake and the rest of their happy hour menu.

Seaweed Salad: A popular offering on Japanese menus across the U.S., though typically made with green seaweed. Fukumoto’s purple seaweed salad gives enough reason to order simply with its vivid appearance, and it’s also delightfully bright in flavor.

Toast: Sa-Tén, which is Komé’s casual coffee shop, offers authentic Japanese toast on their menu, along with many other traditional breakfast and lunch options. Toppings range from sweet to savory, as simple as honey butter and as sophisticated as smoked salmon with sriracha mayo and dried seaweed.

Okonomiyaki: A savory pancake made with eggs, shredded cabbage, and any sort of chopped veggies or meat the maker chooses, topped with a heavy drizzle of mayo-based sauce. While finding okonomiyaki in Japan is as common as finding omelets here, the dish is few and far between in Austin. Lucky Robot Japanese Kitchen makes it loaded with pork belly, and Komé offers a seafood version.

Curry: A creamy, savory comfort meal. While a few restaurants in town make curry, Domo Alley-Gato is the hands-down go-to, as Japanese curry is the main dish on their menu. Depending on whether you order meaty or vegan, it’s made from beef or veggie stock and topped with shredded beef, fried pork cutlet, or fried eggplant.

Katsu: Breaded and fried chicken or pork cutlet, ordered on its own or as an add-on. Musashino serves quite a few traditional plates alongside their vast sushi menu, including chicken katsu. They expertly fry katsu that’s moist on the inside and crisp on the outside, which adds a nice bite of texture atop curry and rice.

Bento: A treasure box full of delicious foods organized into compartments. The shokado bento at Musashino easily feeds two people. The presentation was beautiful, the contents overflowing with vegetable and shrimp tempura, salmon teriyaki, miso-grilled chicken, fried rice, miso soup, and salad, in addition to a colorful selection of sushi.

Soba: Buckwheat noodles, made with or without wheat flour, are often gluten-free. Soba is a go-to meal in Japan. They’re served warm inside of broth, like ramen, or cold with broth on the side for dipping each bite. Haru Sushi serves their soba cold – a perfect summer dish.

Temaki: Newest to Austin’s Japanese food scene is Uroko, a snug cafe tucked into Springdale General and crafting temaki, or hand rolls. Temaki has the same ingredients you’d find when ordering sushi rolls, but wrapped in a cone-shaped sheet of seaweed rather than sliced into rounds – way easier to devour by hand.