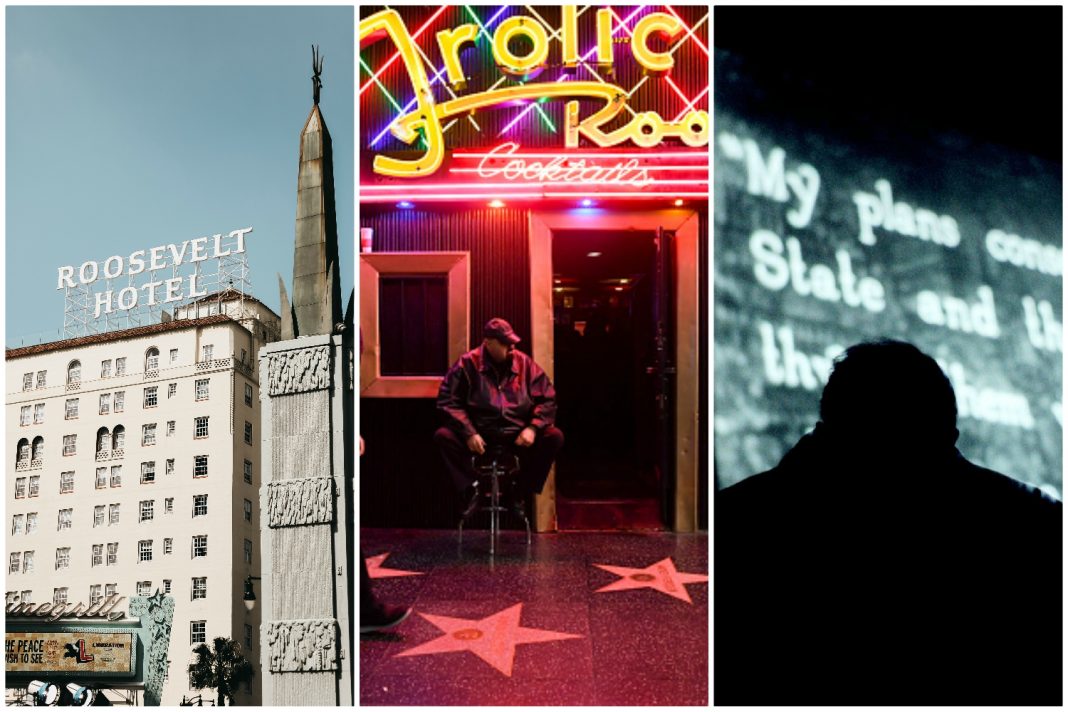 Scott Michaels truly embraces the morbid. Since 2005 he has been regaling tourists with lurid tales of true crime and Hollywood lore aboard his wildly popular Dearly Departed tours, and he recently opened a museum filled with “tragical artifacts” from L.A.’s history. On display is everything from bits of Sharon Tate’s fireplace and the mangled Buick Electra that Jayne Mansfield died in to the cremated remains of The Addams Family’s Pugsley, Ken Weatherwax, and the ashes of a pet dog picked up at a yard sale for four bucks. “He’s like our little ghost watchdog,” says Michaels, who also keeps a supply of sage and holy water at the ready. Here, in his own words, is a rundown of the most haunted places in Hollywood.

This place is crazy haunted. There’s a man still walking in the front yard of his house, which used to be on the same property but is long gone. He’s still walking around as if his old place is still there, but you only see half of him.

Back in the 1940s and ’50s, this was Ciro’s, a mob hangout. There’s still a dark presence in the basement—maybe some executions happened down there. It’s just Pauly Shore’s storage space now, but they still have an old booth from Ciro’s in the kitchen.

We were doing overnighters 20 years ago and heard footsteps. Somebody explained to me that spirits who don’t know they’re dead yet gravitate toward human shapes, and apparently wax statues and mannequins are an attraction for the realm of the deceased.

The basement is creepy as hell; they have these boilers like Nightmare on Elm Street. My friend and I were alone, but we kept hearing tap, tap, tap and footsteps clomping after us. We hightailed it out of there. It was the first time I was chased by a ghost.

A bartender was working there early one morning and let a gentleman in to use the restroom. She heard violent, loud kicking and pounding on the door and assumed it was him. But when he came out, he asked, “What the hell is that?” It turned out to be this sinister thing in the ladies’ room.

Every theater’s got a ghost. Howard Hughes walks around his old office here. Spirits still think those places are the way they were when they were living, so he is seen walking through walls, which were doors in his day.

Cabana 213 is crazy sinister. A friend rented it and saw a man hovering above the bed. He had no feet; they were not severed, just faded. He was in pajamas, and his face was bruised and bloody. As she walked in, he turned and looked straight at her—and she just ran out.

Apparently Elizabeth Short, the Black Dahlia, was a regular at this clubby bar. Sometimes you can see the image of a woman with black hair cowering in one of the ladies’ rooms. I’ve had two psychics go in with me, and both felt something absolutely horrific in the passageway behind the building.

In the 1970s this was A&M Records, and the Carpenters recorded the vast majority of their hits there. Now, there’s a certain time of night when the equipment stops working and Henson technicians will not record. But they say if they play an old Carpenters song, everything will work OK.

It’s such a romantic story. The couple that opened it had a love of silent movies, and the husband died from chemicals used to preserve them. Laurence Austin weaseled his way in with the widow and inherited the theater before his boyfriend put a hit out on him. It’s boarded up now after that Cinefamily scandal, but it’s supposed to be reopening.

RELATED: The Ultimate Guide to Halloween in L.A.

Stay on top of the latest in L.A. food and culture. Sign up for our newsletters today.

No time for a full reno? Try these 4 cheap and quick home upgrades instead, Lifestyle News