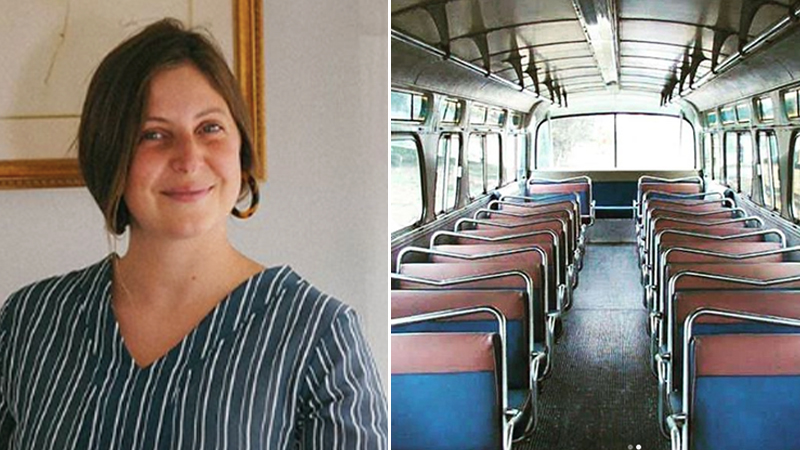 Are you one of those who is tired of being caught up in the chaos of a fast-paced world, chasing behind endless pursuits? Then it’s surely time to get inspired by this lady from New Jersey who ditched her New York City apartment to live out of a converted 1966 GMC Commuter Greyhound bus.

Having lived in New York City after graduation, Jessie Lipskin observed that many people were wasting a lot of their time and energy on securing physical items.

“Most of these items, from my standpoint, felt superfluous to a meaningful life and I realized that the time and emotional energy devoted to physical things could be better spent elsewhere. This was the spark that led me to my tiny home lifestyle,” Lipskin wrote for Apartment Therapy.

“I felt like there was something else out there,” Lipskin told ABC News.

Lipskin took her inspiration from the documentary “Garbage Warrior,” which goes on to explain the story of an eco-architect named Michael Reynolds and his vision to build Earthships—a type of solar-heated house made of natural and recycled materials. She then had her own vision to live a more sustainable lifestyle by downsizing.

“I began to consume everything I could read, more about sustainable lifestyles. Ultimately, a home on wheels seemed like a perfect solution: I could easily explore new places (finding a permanent place to settle, in the short term, was not a priority for me), and I could continue to live a vegan lifestyle,” Lipskin wrote.

Then, one fine day in 2015, while scrolling through eBay, a 1966 GMC Commuter Greyhound bus—the same model driven by Keanu Reeves in the 1994 film “Speed”—caught her attention.

Lipskin liked the aesthetic of the 1966 Greyhound bus so much that she bought it for US$7000, even though she didn’t possess a driver’s license at that time.

Speaking to CBS New York, Lipskin said: “It looked just like a commuter bus from the 60’s or 70’s. All of the original seats were in. It was pretty dusty, but it had lived its life in the desert after it retired from the San Francisco Bay area.”

As Lipskin was unable to drive the big vehicle herself, two friends helped Lipskin transport the vintage bus from Perris, California, to New York, before she carried out the renovation project to transform it into a cozy, 400-square-foot tiny home on wheels.

In three years’ time, Lipskin shifted to new places with the bus seven times, as she sought help from different people, such as local contractors C&S Electrical and Sawbucks Contracting, for DIY and repairs.

She even sold the seats of the bus to a restaurateur.

“Growing up in New York City, I didn’t have a lot of experience doing DIY and repairs,” Lipskin said. “I tried to learn as much as possible and help where I could, like installing and finishing the countertops.”

Downsizing to a tiny home, Lipskin had to discard a lot of things to fit everything she possessed in the bus, but it was all worth it.

“If you get rid of everything you don’t really need, you’ll feel lighter and more able to move. You have to select the things that hold value for you. For me, it’s things like old books,” Lipskin said in an interview with Asbury Park Press.

Finally, after three years of renovating, Lipskin moved into the converted bus permanently in January 2018.

The home on wheels was replete with attractive rugs, colorful artwork, pillows, and sentimental items, like old black-and-white wedding photos of her grandparents, and a stack of fine china dishes handed over from her great-grandmother.

Alluding to her tiny mobile home, which can accommodate up to four people, Lipskin said: “When I walk in, it feels huge. It feels even bigger than my New York City apartment.”

“I love not having a TV. I had the option to have a TV, but I really like waking up in the morning and hearing the birds outside my window,” she told the Insider.

Lipskin, whose favorite pastime is reading, said: “I feel like I’ve been so busy these past few years that I haven’t read as much as I’d like. I have the time now to do that.”

“Once I started purging the things that held less value, I felt more free to travel. It occurred to me that a more mobile lifestyle might suit me,” Lipskin wrote.

“I wanted to be able to experience life,” she said.

As Lipskin parked her home on wheels on a privately owned land in Asbury Park, New Jersey, she could melt the daily stress of life away by taking walks through the woods, enjoying the beauty of nature.

Now, Lipskin is working remotely in finance and has the flexibility to travel internationally, so, she wants an even smaller home—a Sprinter conversion or a towed Airstream trailer—and has listed the bus home on Craigslist at US$149,000.

While looking for the right buyer, she turned her chic, beautiful living space into an Airbnb in Joshua Tree, California.

Do you find Lipskin’s home on wheels fascinating?