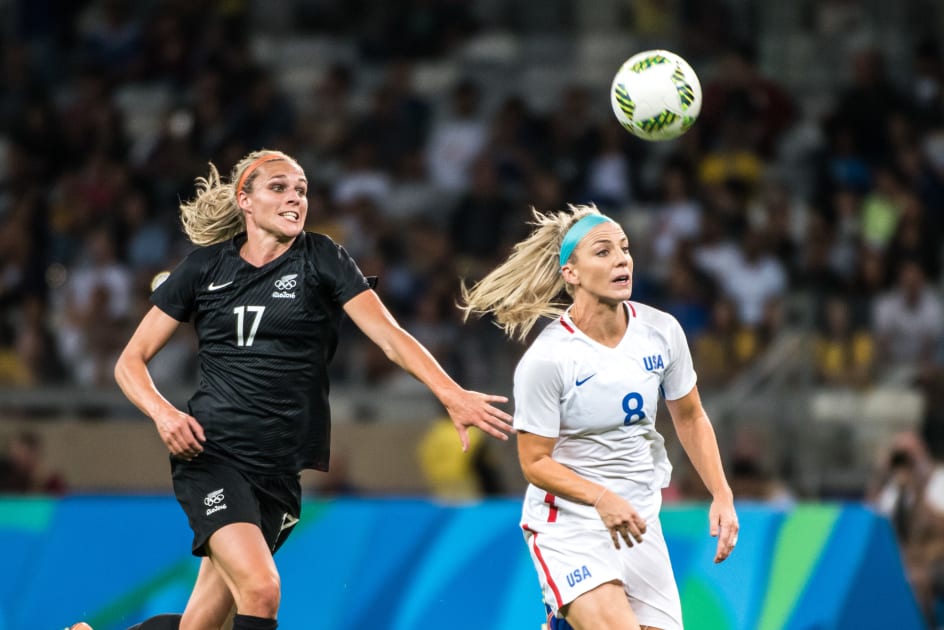 From despair to hope to genuine optimism. That’s the road travelled by key Football Ferns striker Hannah Wilkinson from the moment, five months ago, she lunged for a ball and felt her world collapse around her.

Having already ruptured the ACL in her left knee – and endured the long and slow recovery – Wilkinson knew immediately what the pain in her right knee meant, as she extended to block a clearance in the dying moments of a match in Sweden, where she plays professionally for Vittsjo GIK.

It meant the 86-cap 26-year-old’s chances of appearing for the Football Ferns in a third World Cup in France in June were slim.

“That was instantly the first thing I thought: France,” she says.

It’s a thought that hasn’t ever ventured far from her mind during a rehab process that has Wilkinson not only on track to beat the odds and make the World Cup – but emerge fitter, stronger and better than ever.

Wilkinson 3.0 is raring to go – the biceps toned by months of relentless gym work rippling as she talks to LockerRoom at an event showing off the World Cup trophy to a group of kids and media at Eden Park’s outer oval.

“I basically camped out in the gym for five months,” she says. “I am way stronger than I was before I was hurt. It feels really, really great. And that makes a huge difference in your game.

“All my strength work has paid off hugely, because now I just feel super-super strong and super-ready. I worked my ass off basically. And the surgery went really, really well. It has left me with next to no pain.”

As well as gym-work, her training regime consisted of cycling (“I could join the New Zealand cycling team – I’m serious!”) to build up her cardio base and explosiveness, and boxing.

“That was really hard actually. Boxing is tough. I did as many modalities of fitness as I could with the intention of going to the World Cup as fit as I possibly could be,” Wilkinson says.

“I’m definitely the fittest I’ve ever been.”

That she is so far ahead of the typical recovery timeline for an ACL reconstruction is down, in no small part, to a mind-over-matter approach: ‘will it and it will happen’, if you like.

“Absolutely. Mindset is everything. That’s what governs everything in the end. It has made a massive, massive difference,” she says.

“Coping with [the reality she would likely miss the World Cup] was pretty tough, but in the end I thought ‘you know, if I really work hard I am just going to see how I go. If I work hard every day I have nothing to lose. Just keep pushing and do everything I can to get there’.

“I’m actually seeing a psychologist as well who is helping with my return to sport confidence. And that is crucial. Physiologically I have passed all my return-to-sport tests. I’m ready. It’s the mental side I have got to get back.”

The tipping point – when she realised the World Cup dream was well and truly alive – came about five weeks ago during testing at Auckland’s Millennium Institute.

“I started feeling stronger than I was before the injury, when I was doing return-to-sport tests at four months. That’s the point where I was like ‘I’ve got a real chance here’.”

The next step in the process is a return to contact football training – which she has been cleared to begin this week.

“It is really tedious and upsetting to be out of your sport for so long. It takes a lot of mental strength. So it feels so, so good to be playing again. I am moving into contact and now it is just about getting confident and comfortable on the ball.”

A stint as an analyst for Sky TV during the Football Ferns’ Cup of Nations campaign at the beginning of March proved a rewarding experience, serving to both stoke the fires and provide a chance to assess exactly how she might fit into new coach Tom Sermanni’s plans.

She describes a campaign where the Ferns were far too good for Argentina, but outclassed by Australia and South Korea, as a “feeling out” process. And she chooses the diplomatic route when ask if she watched on thinking the presence of a striker with 26 international goals to her credit might have added some teeth to an at times blunt attack.

“Obviously every time I sit on the sideline watching I want to be out there,” she says. “The potential there is huge.”

She’s particularly enthused about the recruitment of the vastly experienced and hugely popular Sermanni to lead the rebuilding project following the destabilising regime of the unpopular Andreas Heraf.

“I’m glad that it’s over,” she says. “Having Tom step in and take over has been huge for the team. He is a fantastic coach and a fantastic person. He forms really great relationships with players and I think that really makes a difference. He understands that the culture is extremely important in the team and that is exactly what we needed after what happened.”

While Wilkinson’s recovery could hardly have gone better, the moment of truth will likely come on May 17 at Busch Stadium in St Louis – the home of the Major League Baseball club the St Louis Cardinals – when the Ferns play reigning world champions, the United States, in a pre-World Cup friendly.

“That gives me about a month just to get my confidence on the field back. The strength and conditioning, I have nailed that,” she says. “I’m really excited. I just want to get back.”

Our conversation takes place about three metres away from the World Cup trophy, which sits on a plinth, encased in tough plastic. Earlier, Fifa’s head of women’s football, Sarai Bareman, has explained to the crowd that the only people permitted to touch the hallowed trophy are players who have won it and, curiously, prime ministers. Wilkinson can’t even look at it for fear of giving rise to a jinx, although she does consent to having her photo taken with it.

The odds of the Ferns being allowed to hold the trophy aloft in France in July are long indeed. But it is not beyond the realms of possibility the Kiwis could emerge from their group and cause some more illustrious nations some headaches in knockout play – just as the NZ U17 girls team did last year in their incredible run to the semi-finals.

“That’s the step that we’re looking to take,” says Wilkinson. “We haven’t got out of the group yet. We’ve got so close.

“[The U17 girls] are an inspiration for us. I know I speak for our whole team when I say that.”

The Football Ferns’ road to France