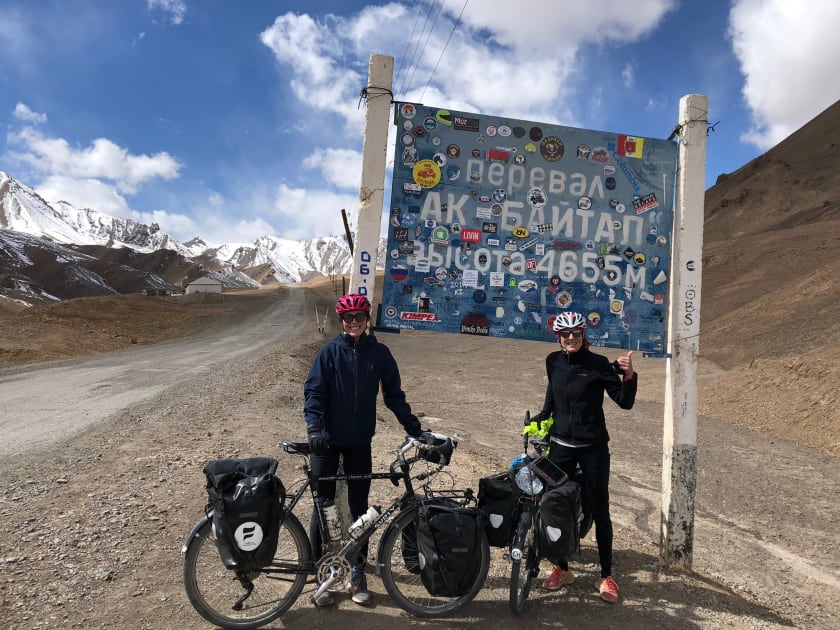 Over the last 10 months, Rebecca Wardell has slept in highway drains, bus stops and deserted buildings. Kind strangers have given her bottled water, breakfast and a warm bed.

It’s not what you’d expect to hear of an Olympian, who just last year was organising the Winter Olympics. Especially one who hasn’t fallen on hard times, but is, in fact, living her dream.

The Kiwi heptathlete is almost at the end of a mission – taking the long way home, from Lake Geneva, Switzerland to Lake Hawea, New Zealand, by bike.

A year ago, LockerRoom brought you the story of Wardell and her two riding partners, New Zealand rowers Emma Twigg and Sarah van Ballekom – who’d conceived the cycling expedition (dubbed The Long Way Home) while working together for the International Olympic Committee in Lausanne.

At different stages of the ride down through Europe, Central and South East Asia, Twigg and van Ballekom peeled off to do other things.

Twigg, “the wind blocker”, needed to get back to Cambridge to start training for a shot at her fourth Olympics, 2020 Tokyo. She went one step closer at the weekend, winning the national single sculls title on Lake Ruataniwha, after two years in retirement.

Van Ballekom, a former New Zealand universities rower, pedalled alongside Wardell for six months before returning to Switzerland, and then rejoined her for the ride through Laos.

But Wardell has gone the distance, persevering through 40 degree heat, wind, mud and snow. She’s about to ride into Singapore – her 18th country – having cycled more than 17,000km.

She’s had just one crash – which took her off the road in Iran and came close to ending her odyssey.

But the 41-year-old says she’s never felt scared, or threatened, even when she’s been cycling alone. Quite the opposite, it turns out.

“I’ve been blown away by the kindness of strangers,” Wardell says. “Every day, someone will do something nice for you.

“I’m an independent woman who likes to do things herself. At the start of the ride, I was changing my own tyres. But when I got a flat tyre in Thailand, a guy stopped to help and I said ‘yes, please’.

“For someone who had the tendency not to interact with strangers unless I had to, I’ve been forced to trust people. It’s been a steep learning curve.”

In a couple of weeks, Wardell will arrive in New Zealand, to pedal almost the length of the country to her parents’ Lake Hawea home in Central Otago. By then, she will have cycled over 20,000km.

The journey hasn’t been simply about getting from one side of the globe to the other. The three women decided to raise money for the Forward Foundation, a Kiwi charity which empowers young girls through sport.

With the target to collect $1 for every kilometre they ride, they’ve so far raised just over $12,500.

Wardell, who competed at the 2008 OIympics and the 2006 and 2010 Commonwealth Games, was a late convert to cycling. She took it up in earnest soon after Twigg arrived in Switzerland to study for her Master’s degree in sports management.

Now, she rides anywhere up to 170km a day. The shortest day was 35km, when Wardell and van Ballekom pushed their bikes through sand in Turkmenistan, where they’d start riding at 5.30am to escape the 40 degree heat in the middle of the day.

But, unquestionably, their worst day was in the Iranian city of Sari, when van Ballekom slipped and brought Wardell crashing down with her.

Both women suffered cuts and scrapes, visited four different hospitals, and were forced to take five days off their bikes. Wardell was the worst off and, for a while, thought her trek may have come to a premature end.

“The surgeon thought I’d ruptured the capsule in my knee, which would need surgery. Fortunately I didn’t. But I have a nice scar, which the surgeon says will remind me of Iran forever,” says Wardell, who still feels the odd niggle in that knee.

Fortunately, too, former New Zealand netballer Charlotte Kight was with them on that leg, and she was able to help take care of the casualties.

Others have tagged along for sections of the journey, including Wardells’ parents, Pete and Jane, who cycled with her through Turkey and for part of her three-month passage across China. They hit China in winter, where the mercury plummeted to minus 11 degrees. “But we only had one week riding in the snow.”

It was the beautiful but brutal crossing of Tajikistan that really struck a chord with Wardell.

“It was incredibly stunning, but it was also the toughest conditions I’ve ever cycled in. Some days the roads were so bad we had to ride through the fields next to them. We climbed 4655m passes, and rode along the border with Afghanistan for almost two weeks. It was so close, we literally threw a stone across to the other side,” she says.

They camped in bus shelters and in a shepherd’s hut in “no man’s land” between Tajikistan and Kyrgyzstan, when it was too cold to pitch a tent. The shepherd cooked them noodles, and chased mice from the room with a stick.

They cycled through snow, sand and herds of sheep and goats. “Pretty much my perfect adventure!” Wardell says.

“In Iran and the Stans we’d go into a restaurant, pay for our meals, then wait until closing time and ask if we could sleep on their floor overnight. They always let us stay – some of them even invited us into their homes,” Wardell says.

She wonders if she’s just been lucky that she’s never felt unsafe.

“In Turkey we had a lot of police escorts. A Turkish policeman had seen our journey on social media and called his mates across the country to keep us safe. We’d have a police car crawling behind us at 6km/h up hills,” she says.

“We once ended up on a motorway and got beeped at a lot. But we’ve been very well behaved.”

Pedalling on her own through Thailand, monks showed Wardell to an empty temple to sleep. Catching a ferry in Malaysia, a cyclist led her on a shortcut through the ferry terminal to avoid traffic, before paying for her ticket.

In almost every country, Wardell has caught up with other Olympians – using her contacts from the three years she spent at the IOC (the latter part as planning and co-ordination manager for the 2018 Pyeongchang Winter Olympics).

In Tajikistan, she met boxer Mavzuna Chorieva, a 2012 bronze medallist who was the first woman in her country to win an Olympic medal. In China, she spent time with gymnast Feng Zhe, the 2012 double Olympic champion, and, in Malaysia, she watched two-time diving medallist Pandelela Rinong training for her fourth Olympics.

“Going to local schools has been such a cool part of the journey, sharing our story with kids, and bringing an Olympian to give more inspiration,” Wardell says.

Wanting to help young women to realise their sporting goals has been a major facet of The Long Way Home expedition. The three women chose to raise funds for the Forward Foundation charity because it encourages high school girls to get involved in sport, develop leadership skills, and inspire others to do the same.

“It resonated with us personally,” Wardell says. “All three of us were involved in high-level sport while we were at school and we received a lot of support and encouragement in our formative years.”

Wardell should cycle into Singapore on Monday. Then she’ll pack up her bike ready to fly to Tokyo – to visit her old IOC colleagues who are preparing for next year’s Olympics – before flying to Auckland.

She’ll make 33 stops throughout New Zealand to talk about the journey, many of those in schools. She’s inviting people to ride alongside her on the way south. Twigg will re-join Wardell in Cambridge and stay for as long as her rowing schedule allows.

The plan is to finally reach Lake Hawea on Easter Friday.

“I know I won’t want to look at my bike for a very long time,” says Wardell.

“I’ll need to find a new job. But first, I think I’ll just enjoy being at home, in my own bed. You certainly learn to appreciate a warm bed, a hot shower and a washing machine.

“It’s been an interesting experience. Especially the mental gymnastics of getting up every morning and wondering how you’re going to get to your next destination. There were definitely days where I thought ‘I can’t go on anymore’.

“I know I could have just flown home, but I would have to live with myself. So you just soldier on. The bad stuff always stops at some stage.”

* You can follow the final stages of The Long Way Home here.