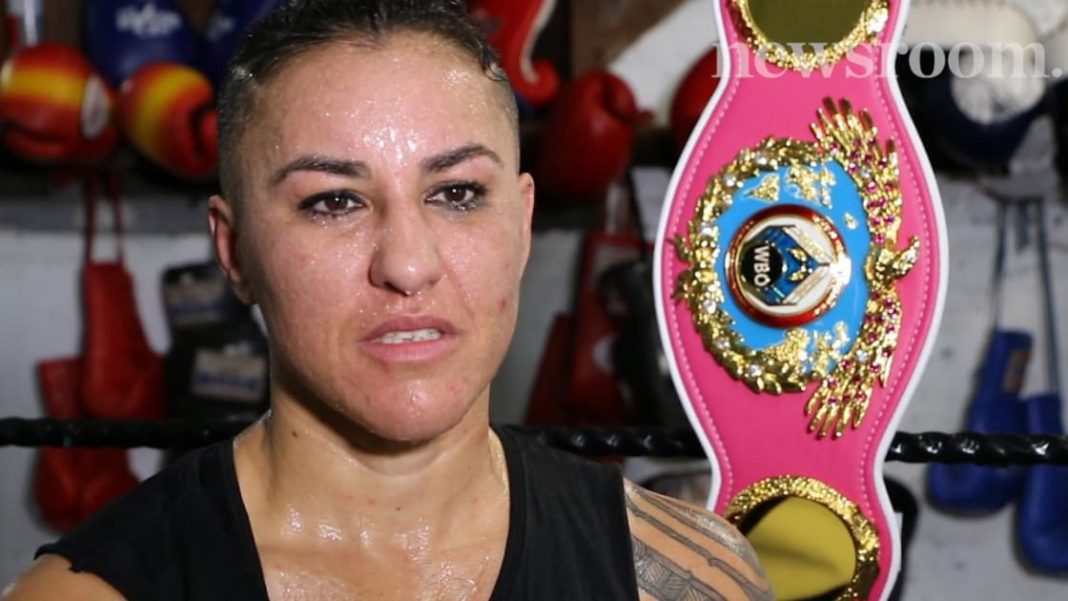 Some sports lend themselves naturally to competition between men and women. Equestrian stands almost alone as a sport where the two genders compete on equal footing at a truly elite level. Yachting is getting there. Tennis has mixed doubles. Bowls wouldn’t seem to have too many reasons to avoid mixed competition.

Other sports, well, in the interests of fairness and competitiveness, separate gender events make sense. Near the top of the list of those sports, you’d think, would be boxing.

Unless, of course, you’re a female light-heavyweight contender looking for an extra edge ahead of the biggest fight of your life.

“I used to spar with girls, but lately I have been training with guys,” says Geovana Peres, shortly after completing five gruelling rounds of sparring with Jerome Pascua – a professional fighter ranked fifth in New Zealand in the men’s middleweight division.

“I love training with the guys because I like feeling the power of the punches,” says Peres. “It is like a boost of energy through my body. Every time I get a punch it is like ‘woo, let’s keep going!’”

Male sparring partners – including heavyweight opponents – have been a key facet of the Brazilian-born Kiwi’s preparation for her WBO light heavyweight title fight against Lani Daniels at SKY CITY on March 30.

In her session with Pascua, Peres more than holds her own, at times pummelling her fellow professional with a vicious barrage of hooks. She concentrates primarily on work-rate, pushing herself to keep up a torrid pace and exerting pressure until the final bell of each round.

Her plan, it seems, will be to overrun the smaller, but more nimble, Daniels with a relentless assault over all 10 rounds of their world title showdown. She knows she won’t have it easy against an opponent who has improved markedly since Peres triumphed via split decision in their first fight – a 10-round classic that saw Peres regain her NZPBC light heavyweight title

“I’m definitely much better than I was a year ago too,” she says. “It’s going to be a good bout.”

The 42-year-old fitness trainer’s journey to world title contention is quite some story. In her native Brazil, she worked for an offshoot of the Les Mills gym empire in Sao Paulo, training wannabee personal trainers. She dreamed of one day visiting the fitness world’s version of Mecca.

“Life in Brazil was good. I had a good job,” she says.

At times her dream of coming to New Zealand appeared distant. It took her 10 years from the day she decided to come here to finally boarding a plane for Auckland.

“I never gave up. I always had the dream in my head that one day I would go to New Zealand,” Peres says. “But I never in my life thought I would be boxing in New Zealand. Never.”

Her path to professional boxing was, like many in the sport these days, via a corporate charity event. In 2015 she accepted a challenge to step into the ring to help raise money for child cancer. Two years later she turned professional.

Having been ranked No. 1 contender by both the WBA and WBO, Peres now stands on the brink of becoming a world champion. Still being in her physical prime at 42, she says, is down to a combination of exercise, healthy diet, positive attitude and surrounding herself with the right people.

“If you want to be successful you have to hang around with people who lift you up, who support you and believe in you – who will do whatever they can to help you chase your dreams.”

Yes, that dream, which is now agonising close.

“It means the world, it is the chance of a lifetime,” she says of her date with destiny.

“But it is not just about having the belt. I want to boost women’s boxing in New Zealand, and through this belt I want to be in a position to empower people to chase their dreams. It doesn’t matter [about] your age, your gender, anything. I want to prove to them and encourage them that they can be whatever they want.

“I want to be an inspiration to people. I want to empower people, especially women, to chase their dreams.”

Whomever claims the WBO belt will join a current list of champions that includes Anthony Joshua, Oleksandr Usyk, Terence Crawford and Vasyl Lomachenko. Women’s boxing at the upper weight divisions is in its relevant infancy, but a global stage will most certainly beckon.

“That’s what I would like – [for it to] open windows, not just for me but for other women here in New Zealand,” Peres says. “We have very talented women here boxing. Winning this title for me would give me the chance to maybe become a full-time boxer. I would love that.”

Peres has already achieved one major milestone recently, gaining her New Zealand citizenship. After residing here for nearly a decade, she has no doubt which nation she represents in the ring.

“I love this country. I love the culture. I love the people. I love everything about it. This is my home. I’ll be representing New Zealand with all my heart.”