Home Living Room This woman has a massive hole in her living room floor that... 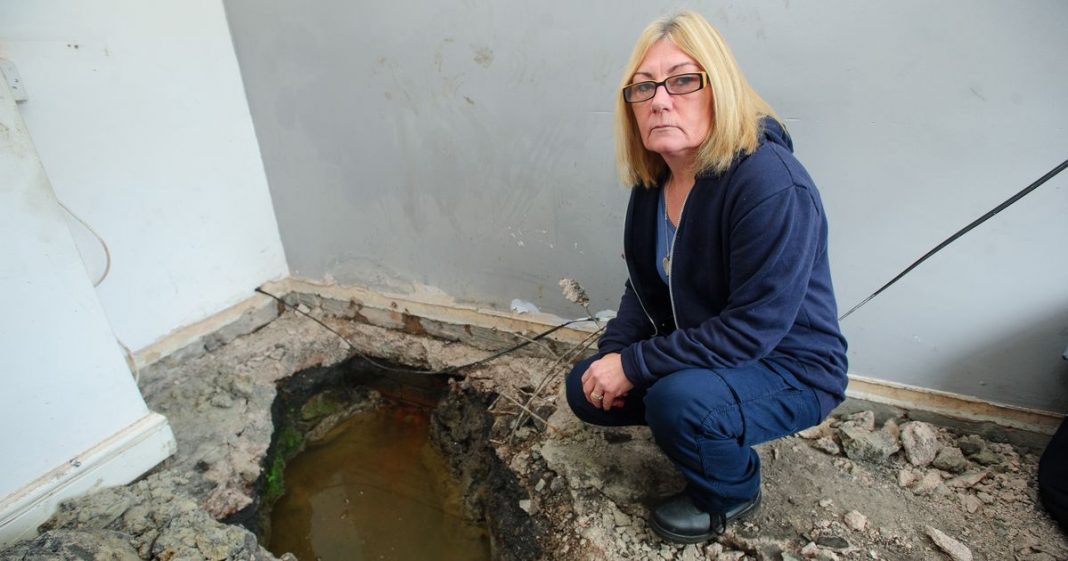 A family have been living with a massive hole in their living room floor since January due to a leak.

Alison Evans, 51, says it keeps filling up with water which has to be pumped out every day to prevent her house from flooding – and she doesn’t know where to turn for help.

Ms Evans, who lives in Trebanog, Porth, says she has contacted her local council, Welsh Water and even local builders to try and help establish what’s happened – but she says the source of the leak can’t be located.

She said: “The hole has been there from the start of the year.

“I go to work and I don’t know if there’ll be water all through the house.

“I have tried everything – the insurance won’t pay out until they know where the water is coming from.

“No one knows where it’s coming from.”

Video: The woman who’s living with a huge hole in her living room floor

The video will start in 8Cancel

Ms Evans has resorted to living in other rooms of the house due to the problem.

Her furniture has been crammed into the dining room and there isn’t much room for them to move around.

The factory worker and mum said when the leak was first spotted, water was coming up through the floor in the living room and going into the passage and dining room.

She said the hole later had to be dug so they could try and establish where the leak was coming from.

Now, the hole is used to hold the water that piles up in the room. Ms Evans, and her husband Keith Evans, have to empty it daily to ensure it doesn’t spread to other parts of the house.

“There are days I have had to come home from work because my husband couldn’t keep with the water coming through,” she added.

“It’s not only us it’s the neighbours as well who can hear everything that’s going on.

“They know about it but we have no privacy at all – it’s really hard.”

Nearly a year later, Ms Evans now finds herself desperate for a solution as she wants her house back in working order before the festive period.

Her daughter turns 18 at Christmas and she wants to be able to do something nice to celebrate.

She said: “It’s hard to keep on top of things.

“Some days I just really want to go to work to have a break from it all.

“It’s horrendous. I once came home from work and there was water coming through my dining room, the passage and through the kitchen.

“I need to know who can fix this as I really want my living room back for Christmas, which is my daughter’s 18th birthday, and for my son to live in a normal house.”

A Welsh Water spokesman said: “We were called to the property earlier this year after receiving reports of internal flooding. We fully investigated and found that the flooding is not linked to our system but instead is linked to the property’s own private pipework.

“While we appreciate the distress of the situation, any repairs to internal pipework is the responsibility of the property owner which we advised at the time. We also offered advice on potential next steps they could take to help resolve the matter.”

Rhondda Cynon Taf council has been contacted for comment.